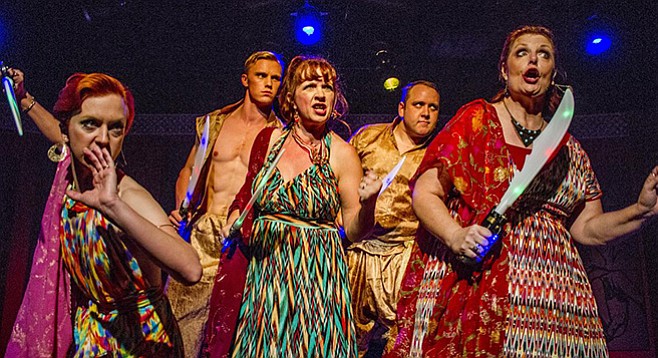 Although Moxie Theatre has produced shows ranging from intense dramas to thoughtful comedies, the company has not staged many musicals. Writer/director Javier Velasco is giving audience members a song-filled production with the world premiere of Eternally Bad.

Inspired by Trina Robbins’ book, the 90-minute one act involves three mischievous sisters, played by Devlin, Melissa Fernandes, and Rae K. Henderson. They narrate stories about goddesses from around the world. The tales often deal with dangerous conflicts between the sexes, which lead to chaotic situations.

Stories include celestial beings ranging from Adam’s first wife, Lilith, to the Hawaiian fire goddess, Pele. Each has a message about how sin can be a necessary evil, yet positive outcomes result from the immortal legends’ actions.

Events start out awkwardly. Since there is extensive talking during the first several minutes, viewers might not realize they are watching a musical. Velasco and songwriter Candye Kane soon find a balance between dialogue and music after the introductory sequence.

The droll script mixes well with the frequently irreverent tunes by Kane, the respected local blues and jazz singer/songwriter. Their light tone stays consistent when several characters suffer horrific fates, such as turning into stone or being eaten by a Barbra Streisand-esque bear.

Devlin, Fernandes, and Henderson bring sultry charm to melodies such as the title number and “Rise Up.” They have confident singing voices and expert comic timing. The actors speak with different accents, personae, and croon a variety of musical genres, from folk to retro-pop, with tracks prerecorded by arranger/music director Steve Gunderson and sound designer Matt Lescault-Wood.

Erik Dugan and Michael Parrott portray the males in the myths. While Parrott provides a worthy, humorous foe for the goddesses, the often-shirtless Dugan (Kate Bishop’s costumes are pretty revealing) comes across as nervous and uncomfortable. He eventually has some hilarious moments, especially during sequences set in Hawaii and Israel. These scenes allow Dugan to make broader choices in his acting style.

Velasco’s speedy approach almost never slows down. He stages the action and the ironically nostalgic choreography on Kristen Flores’ fantastical set — a round platform upon which the characters lounge and interact. David Scott's projections add to the comedy with bizarre pop culture references and occasional adults-only imagery.

For all the enjoyment Eternally Bad offers, the lack of cohesiveness between the scenes makes for a laid-back production. Perhaps that is the point, but there could have been a stronger arc if more emphasis was placed on the themes that tie the narratives together.

With additional drama, the adaptation would result in a bigger impact. Still, Velasco and Kane and the talented stars make the revue a breezy summer adventure.