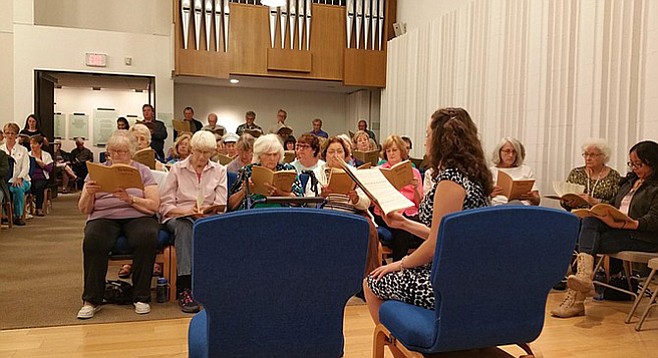 There is a series of "summer sings" at Mission Valley Methodist Church over the next several weeks. I went to the first one on Wednesday, July 8.

The piece for the concert was Gabriel Faure's Requiem. The concert was free for audience members but $15 if you wanted to sing. The use of a score was included.

I should point out that this is predominantly for singers. I took my kids and the three of us were just about the entire audience and we sat at the front of the room facing the chorus. Yes, usually the audiences sits facing the chorus. It just felt reversed since we were on stage and the chorus took up most of the space.

I can hear you protesting that people come together to sing karaoke. It's different. Okay?

The next one is on Wednesday, July 22 at 7 p.m. The music for that occasion is Vivaldi's Gloria. The Vivaldi is such an approachable piece of music that my 11-year-old is going to go and sing it.

This is a great way to experience singing some substantial music without having to commit to a rehearsal schedule.