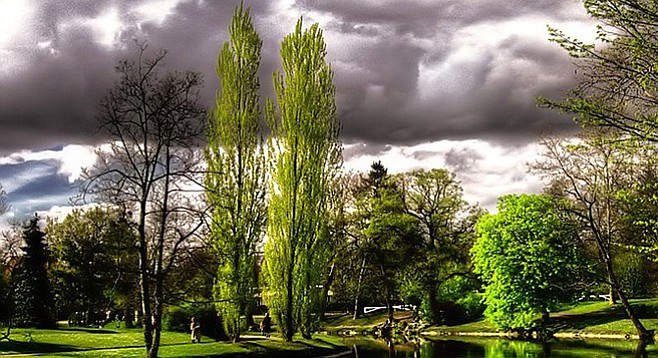 Faure's Pavane not that revolutionary

Let’s get a little crazy and combine a summer piece of music with the esoteric pick of the week. The power of this concept is overwhelming me. It’s the perfect summer storm.

Faure composed his Pavane for a series of summer concerts with the idea that the piece would be elegant but not important. A pavane is a dance and there were dancers involved for the summer premiere in Le Vésinet.

Le Vésinet was and still is one of the richest suburbs of Paris. It was the first community in France to be designed as a sort of park. It’s known for it lakes, woods, and mansions. See there? Rich people funding the arts. It’s not a new thing.

Faure dedicated his Pavane to his patron, the Countess Elisabeth of Greffuhle. Her cousin, one Robert de Montesquiou, provided the poetry for the chorus, thereby ensuring the text would be forgettable.

Faure’s intention to write an elegant yet trivial piece of music was fully realized. I’m not sure there has been a more elegant and refined, yet unimportant, piece of music ever written.

Perhaps Faure’s Pavane is an allegory about the French aristocracy of the mid- to late-19th century — elegant but unimportant.

Boom. Let’s get naked and start the revolution! Down with the one percent. Occupy Le Vésinet. Let’s do this. Oh, now’s not a good time for you? Maybe we’ll have the revolution later? Ok, I was just — ahem — kidding anyway.

This music might not quite qualify as esoteric because it will be vaguely familiar to almost anyone who hears it. However, naming the title and the composer is something else.

A strange combination of paintings to accompany this piece of music. Tell us something about "Spadecaller" which presumably organized the visuals.