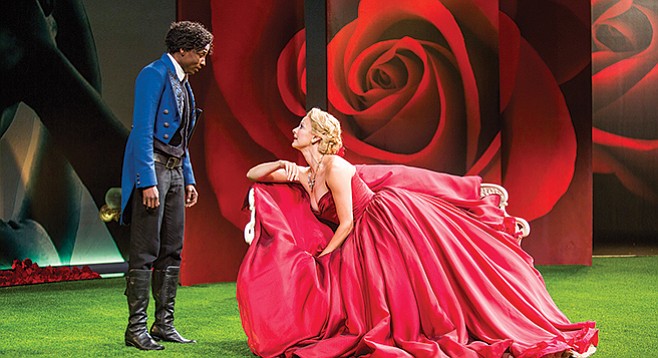 Girls will be boys in the Old Globe's Twelfth Night

The most memorable part of the Old Globe’s Twelfth Night is a scene change. At the beginning, except for an Astroturf oval on the floor and the portrait of a marble angel on the rear wall, things are mostly colorless. Then suggestions of red occur, followed by three shields with red roses painted on them. Then the memorable part: at the top of Act Two, Geneviève Waïte’s “Love Is Coming Back” purrs from the loudspeakers, and Olivia’s attendants enter carrying gobs of roses. They drop them on the floor or toss them into the mini estuary upstage. Then wheelbarrows dump scads into the water. The stage becomes a Valentine’s Day blur of reds in sync with Waite’s lyrics: “Romance is on the rise/ And all across the world/ boys and girls are making eyes.”

Also memorable: toward the end, red petals rapunzel out of peoples’ hats. In these moments, the stage becomes whimsically magical. But these visuals are cosmetic. The energy’s external. Take them away, and the production is forced and often one-note, and the acting’s almost as stiff as the angel on the wall.

Twelfth Night is one of Shakespeare's two “twin plays” (the other, The Comedy of Errors, will be the Old Globe’s second summer show). It starts with a shipwreck at sea. To fend for her life, Viola must disguise herself as a boy in a foreign country. Illyria has emotional wrecks as well. Olivia lost her brother and father and rejects Orsino’s advances. Both pretend to be extreme mourners. In fact, just about everyone is playing a role. So maybe the twelfth and final night of revels can coax them to drop their poses and be themselves?

The comedy’s famous for being so rich that, depending on the production, different characters can win the laurel. Sir Toby Belch, lover of cakes and ale, is the odds-on favorite. Young Viola, in male “usurped attire,” is a sympathy-magnet. Other top candidates: Feste the wise clown; inept Sir Andrew Aguecheek, whose inflated self-image is light years from his abilities; and Maria, the crusty waiting-gentlewoman, can win by a nose for her nasty schemes.

And of course, the “self-sick” Malvolio (“I dislike,” in Italian). He isn’t a Puritan, just a monster narcissist convinced that if he dons the guise of heroic faith everyone will love him to the skies.

In the Old Globe’s production, the laurel goes by default to Sara Topham. Olivia, who vows to mourn her dead brother for seven years, is usually played very young with the I.Q. of soap. She is beneath Count Orsino’s station, but attractive enough for him to wax swoony from her snubbing.

Under Rebecca Taichman’s direction, and wearing costume designer David Israel Reynoso’s sumptuous fashion show — literally: Olivia enters four times with the same dress in four different colors — Topham takes centerstage: out of all the cast, she comes closest to matching her feelings with her words. She is goofy, but genuinely so. The rest perform like actors imitating actors imitating Shakespeare.

The poet Peter Levi, one of my favorite commentators on the Bard, writes that some productions “exaggerate the gaiety of the play, some the dark side, and some both.” This version just exaggerates. The actors use formal deliveries, indicating gestures, and much posing. They relax some in Act Two, thanks in part to the parade of roses, but even then — and though the word “mad” recurs dozens of times — most never really cut loose.

The music — aka the “food of love” — does. Along with the kittenish “Love Is Coming Back,” Todd Almond’s original score nicely showcases the songs. And Manoel Felciano performs them impressively as Feste, a violinist, tumbler, and vocalist. But he’s far too young for the autumnal jester, and his most memorable bits — as when he strolls through the audience passing his hat — are external to the play.

There are few comic scenes as surefire as those in Twelfth Night. And they do draw laughs at the Lowell Davies outdoor stage, though only on the other side of the audience — as if on a laugh track. They would draw more if Sir Toby (Tom McGowan), Sir Andrew (Patrick Kerr), and the “lighter people” didn’t fever-push for laughs. And if the extended comic bits, like Sir Andrew fumbling with his sword-belt, or the clowning that cartoons Robert Joy’s Malvolio in prison (and elsewhere) didn’t overstay their visit.

Amy Aquino’s Maria earns some good laughs as Maria. Buy why, whenever she’s the center of a scene, is she blocked in front of the “lighter people” — in effect having to turn her back and snub the audience?

And why, for that matter, are some of the most important lines given no chance to breathe? Before Sir Toby can finish “Dost though think because thou art virtuous there shall be no more cakes and ale?” Feste cuts it off with a loud “yes!”

Or, after Orsino (an un-melancholic Terence Archie) delivers his misogynistic salvo, why does Cesario’s telling retort — that men “prove much in our vows, but little in our love” — get jumped on?

And do we need study-guide aids like the plastic container for a urine sample? Or injected modern idioms like “rat bastard”? I guess we do, if the production considers its audience to be one big groundling.