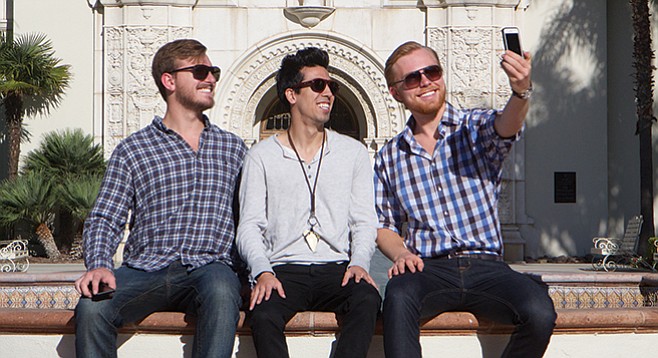 But Alison DaRosa guide app not so promising

In April 2013, Ryan Grainger and Bobby Sullivan found themselves faced with a particular First World problem at Coachella. The then-20- and 19-year-old University of San Diego students could not see all 190 performances. Although they did have some idea of their priorities, they wanted to catch special appearances and surprises at the festival, and when they drove back to San Diego when it was over, they wanted to be able to say, “I was there when…”

“One of the hardest parts about [the hugeness of Coachella] is, Oh, I’m over here seeing this band, but maybe that’s more fun over there,” Sullivan explains. “It’s kind of that fear of missing out.”

The two friends decided they needed an app that would give them a clear picture of what was happening nearby so they could make an informed decision about where to go — without having to scroll and sift through a bunch of Twitter or Instagram feeds. 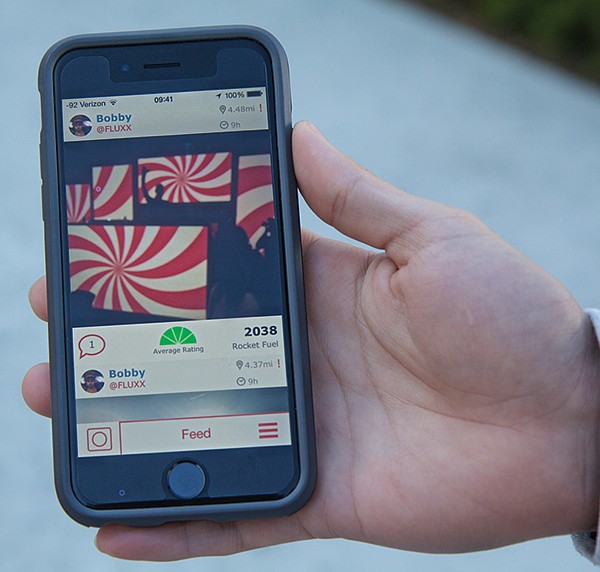 Rocket’s launch is promising, but can it reach a stratospheric height of popularity?

Nearly two years later, following a test launch at University of San Diego, Granger and Sullivan are on the brink of launching their new app, Rocket, at San Diego State University, UCSD, and University of California, Santa Barbara.

And when they do, Rocket will be one drop in a sea of 700,000-plus apps available in Apple and Google, Inc., app stores. 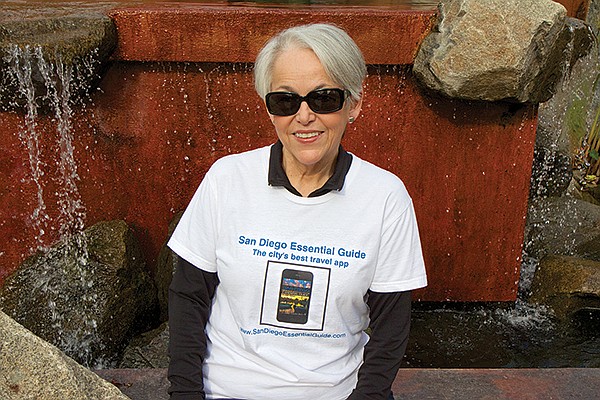 Alison DaRosa was convinced that the journalistic purity she brought to her app would make it a top seller for longer than it was.

Around the same time Rocket launches, another app created by a San Diego local disappears from the Great Sea of Apps. San Diego Essential Guide author Alison DaRosa is both disappointed and relieved that the life of her app is coming to an end: disappointed because it’s a project she was proud of, and relieved because it sucked the life out of her and became a financial burden.

“If I was calculating, I made, maybe, pennies an hour, literally,” the 66-year-old journalist and travel writer says. “At first it was fun because I was going new places, learning new things, meeting interesting people, and so all that was cool.”

DaRosa started her app in 2010, two years after she’d accepted a buyout from the San Diego Union-Tribune, where she’d made $75K per year, plus benefits. She’d worked as the newspaper’s travel editor for 15 years, following another 15 as a political reporter. A fellow travel writer who created a San Francisco app with Sutro Media suggested that DaRosa create one for San Diego. Sutro wanted at least 150 entries, and DaRosa went for it, deciding at the outset that she would create the type of app that she’d like to use when traveling. She ended up including 280 entries and some 3000 photos.

“Above all, I’m a journalist,” she says, “and I wanted it to be good. I didn’t write about anything that I didn’t actually try.”

The app did well from the beginning. It landed on AAA’s list of Cool California Apps; on Apartment Therapy’s Top 10 Travel Guide Apps for Visiting Sunny San Diego; and, “at one point, it was in the top 25 of all Apple apps,” she says. And when she showed it to the San Diego Convention and Visitors Bureau, they not only added it to their website at the top of their list of apps, but it was also the only app they included that wasn’t free.

The app sold for $2.99, and DaRosa received 90¢ for each one sold. She estimates that for the first year and a half, she made $300 to $500 a month, enough to break-even on the amount she spent visiting restaurants and paid-entry destinations around town. She kept her eye on the numbers, waiting to see them jump. She was convinced that the journalistic purity she brought to the app (no sponsored entries, all entries written from her experiences) would help it continue to rise to the top.

“I did have visions of grandeur,” DaRosa admits, “looking at the number of people who come to San Diego and thinking, If one out of ten buys the app, I’m making some decent money!”

But then in December 2013, Sutro Media sent an email to the makers of the 450 apps they’d developed, that said, “Sutro will be transitioning to a less active stage of life starting in 2014…. We also plan to move to a quarterly royalty payment period for all royalties starting in 2014.” And then they stopped publishing updates altogether.

In the final months, she estimates that she sold five apps per week. And now, it’s out of commission entirely. Earlier this month, she asked Sutro to remove it from their offerings and the visitors bureau to delete it from their site.

Developers of the Rocket app discuss its beginnings and plans for the future.

In January 2014, Gartner, an information technology research and advisory company, issued a report that concluded, “less than 0.01 percent of consumer mobile apps will be considered a financial success by their developers through 2018.”

Grainger and Sullivan are not spooked by these stats or by DaRosa’s story.

“When this idea first popped into my head, I was, like, This is it. I felt like Charlie and the Chocolate Factory when he got that golden ticket,” Grainger says. “We’re not just trying to create another social media app. We’re trying to create a unique experience that doesn’t exist yet.”

Grainger spent the first three months of 2014 creating the wireframes — basic structure and functionality — for the app, which he then sent to a developer in New York, spending “a couple thousand” dollars of his money to have them build a prototype.

Using the ephemeral sharing concept, Rocket users post photos in real time. Users do not have to follow each other; the photos just show up within each user’s “orbit.” Each photo posted receives a given amount of “rocket fuel,” which decreases with each passing hour until it disappears in two days. With a swipe of the finger, users can give small or large amounts of rocket fuel, and the more each photo has, the longer it stays.

The app's creator discusses its fate.

Grainger offers a real-life example of how it works.

“I was walking from my house to a local burger shop, and I was showing the app to a few people. And I see this photo that Bobby posts at a barbecue place around the corner. It was like this big party with his fraternity over there. [Without the app] I would not have known,” he says. “Had anyone else had the app, they would be, like, ‘Oh this barbecue place is going on.’”

On December 2, when they began Rocket’s test launch at the University of San Diego, they got 250 users. By the next day, they had 500. The week before Christmas, Rocket had 250 active users per day, each spending an average three minutes per day on the app. They plan to have at least 1000 users by February when they begin their Thunderclap strategy launch at San Diego State and University of California’s San Diego and Santa Barbara campuses. After that, they plan to hit the Los Angeles club scene. And then, Las Vegas. The app is free, and they’re not selling advertisements yet. But Team Rocket (which now includes Grainger, Sullivan, and two more buddies, Andrew Gruszka and Ashton Meginnis) has big dreams.

“There is a reason apps like Snapchat can shoot to become billion-dollar companies overnight, or YikYak, raising millions of dollars in funding. It’s because of its nature that promotes communication virality,” Grainger says.

At this point, the young men have a financial cushion for the app’s development, design, and promotion, which has been provided by investments from their fathers. MavenLink, the project-management software company Grainger’s father founded, has a stake in RocketApps, and they provide guidance and advice on maximizing “virality” potential and so on. Grainger won’t divulge how much MavenLink’s stake is, but he says, “it’s a pretty good amount, and we couldn’t have gotten the ball rolling without them.” Sullivan’s father, who owns a catering company in Utah, has also invested in RocketApps. Again, when asked the total amount their families have given them, Grainger says, “It’s enough to give us runway for almost two years.”

When I ask Grainger if he’s concerned by the high number of app failures or the low odds of creating an app that lands in the 0.01 percent that succeed financially, he says, “I’ve been told I should have more reservations, but I don’t have any, actually.”