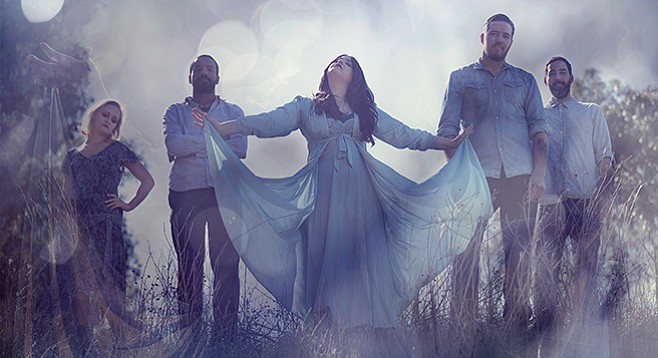 The curious ears of Midnight Pine

It was Midnight Pine’s cover of Radiohead’s “Exit Music (For a Film)” that caught the attention of a person working on cable network Bravo’s first scripted series, Girlfriend’s Guide to Divorce. Not long after, the show’s producers asked the band if they could use their song “Caution” for the episode Jake’s Thanksgiving Surprise, which aired Tuesday, February 10.

Getting featured on a television series is the latest bit of good news for the band since releasing their second album, Buried, in 2014. Since its release, Los Angeles radio station KCRW added “Caution” to its rotation. KCRW disc jockey Chris Muckley added it to the station’s “Top DJ Picks” during the first month.

“We were super excited. KCRW has been ahead of the game...and it’s an honor to find a home in their ears,” Alfred Howard, percussionist and lyricist for the Midnight Pine, tells the Reader. “I hear from random folks that they heard us on KCRW and it lends a feeling of legitimacy to what we’re doing.”

The buzz surrounding Midnight Pine since forming in 2012 hasn’t stopped the band’s members from playing music for other projects.

Howard, who writes lyrics for eight projects, also plays alongside Midnight Pine keyboardist Josh Rice in the Heavy Guilt and the Cold Fact. Midnight Pine vocalist Shelbi Bennet sings for San Diego folk band Creature and the Woods, and guitarist Matt Molarius, who also plays in Transfer, plays bass for Creature and the Woods. That band is working on its debut EP, Widow’s Waltz. Midnight Pine violinst/cellist, Marta Blalock Zaludova, splits her time playing between Pine, the classical band Imprints, and working as a studio musician.

“We’re all rather ambitious musically, and the musicians we’ve been fortunate enough to work with are extremely talented and versatile,” adds Howard. “There are infinite genres, and we have curious ears...”

Midnight Pine is working on releasing “Caution” as a single on vinyl with two outtakes from the band’s debut album, Awake Now. The single will be released on Howard, Rice, and Molarius’s Redwoods label this spring.

The band will share a bill at the Belly Up on Wednesday, February 25, with “freak Americana” act Taken by Canadians and retro-rockers Vinyl Mill.