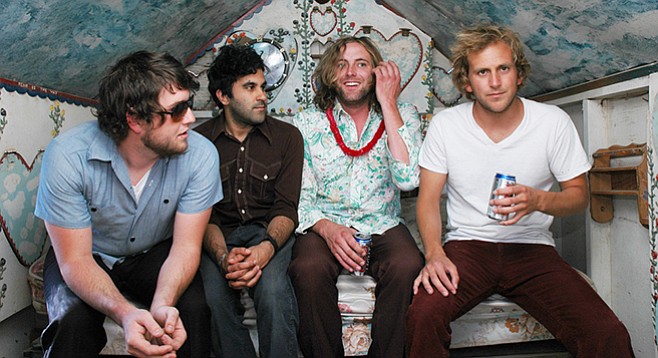 Browsing the 4100-plus band pages in the Reader’s Local Music Database, you’ll find many performers are uploading their newest video clips to their band pages, all viewable on the website’s Video Jukebox. Here’s our spin on the most recent additions.

The Midnight Pine performs a live acoustic version of their song “Caution” (heard this year on the Bravo TV show Girlfriends’ Guide to Divorce) on an edition of the Trolley Show series. Saddled with an audience of slightly bemused streetcar riders, the camera keeps tight on singer Shelbi Bennett and percussionist Alfred Howard, accompanied by guitar and toy piano, as they roll out a solid, if scattershot, groove that’s only partly drowned out by the indifferent chatter around them. They’ll appear November 14 at the Soda Bar as part of San Diego Music Thing.

Nukem’s “Lethal Injection” is a concert clip recorded January 31 at the newly rejuvenated (and metal-centric) Brick by Brick. It’s too darkly lit to see much of onetime Psychotic Waltz drummer Norm Leggio and his current crew of head-bangers, but dig the periphery clips of guys in the front row playing along on air guitar and flipping those Dio devil-fingers. They’re playing at the Merrow in Hillcrest on October 22.

Jeffrey Joe Morin always astounds with his soulful, solo blues, and the clip for “Sunny Riverside,” from his upcoming sophomore album, is no exception. The video (directed by Scott C. Wilson) opens with Morin sitting on a park playground bench, his plaintive guitar playing adding weight to the sorrow of his tale of battlefield regret. “He shot, I shot, he’s dead, I’m not…he looked me in the eye as he died.” In this case, the passersby, mostly parents walking with children, are not only oblivious, but they literally vanish into thin air, leaving Morin all alone with his pain and public exorcism.

The Donkeys’ live video for the title track of their album Ride the Black Wave was recorded for a Pickathon Pumphouse session in Portland, Oregon last year. Evincing a keyboard-dripping Doors-ish vibe this time around, the band plays quietly on a simple setup in a small space, with drummer-singer Sam Sprague bringing his most Rick Danko-like world weariness to their newest sagebrush sounds. Wrapping quietly with a fadeout, one band member can be heard stamping his own instant review on the rendition, one in which we concur: “Sweet!”

Other recently uploaded videos on the website come courtesy of electronic duo PRGRM, the Tarr Steps (a jazz/soul fusion duo featuring Jonny Tarr and Steve Such), and Action Andy & the Hi-Tones.