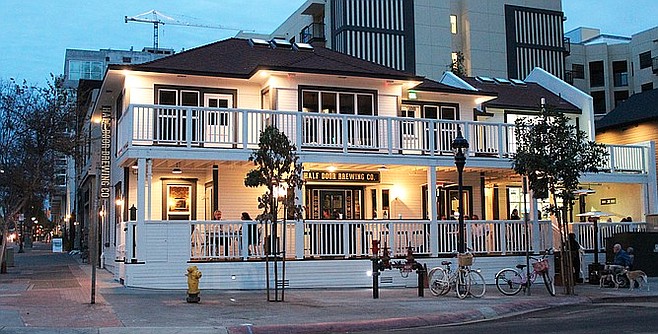 When I first visited Half Door Brewing Company, it was still being constructed. There was a protective wall around the site, the outer veranda had no floor, and the interior was sheet white, showing zero trace of the homey space presented in artistic renderings. Yet, project runners Stacy and Dan Drayne said it was less than a month from opening. I wished them well and hoped for the best. Honestly, I doubted they’d get it all done, but somehow, they buckled down and rocked it out. Their reward—and the reward of East Village denizens—is a comfortable brewpub with a healthy buzz and friendly neighborhood feel. 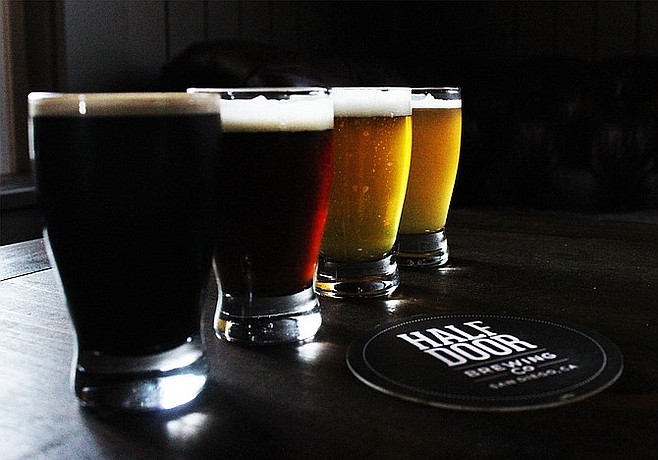 A sampler flight at Half Door Brewing Company

I’ve been back a couple of times, the first to get a sip of Dan’s dry Irish stout and Irish red ale. Both are musts for an Irish brewer helming an Irish-themed brewpub (even one that vows to employ the best of West Coast brewing style along with his personal heritage), and neither disappoint. The stout is served on nitro and drinks like Guinness but delivers a lot more roasty, bitter chocolate flavor in a creamily refreshing package. Meanwhile, the red tastes of toffee with lasting toasted notes in the finish. 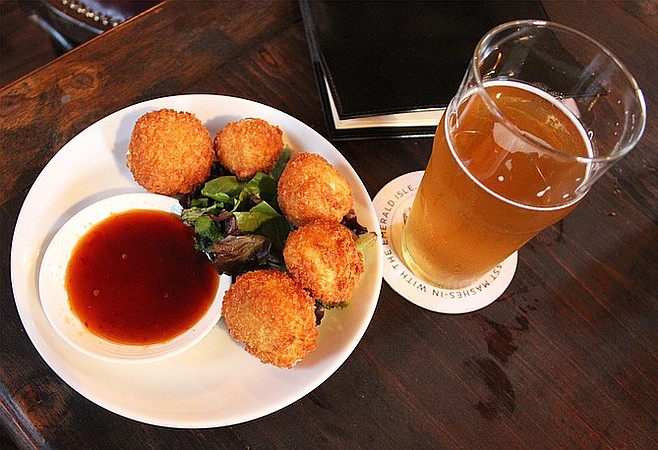 Those promising beers inspired me to return for a full session at Half Door, complete with food and two more of Dan’s beers, a pale ale and IPA. The former was light in malt character, allowing a blend of Galaxy and Nelson Sauvin hops to shine. It tastes and drinks like a low-alcohol West Coast IPA and figures to be a hit with those looking for San Diego-style beers. The IPA tasted a bit more grassy and muddled, and is already being reformulated to bring out more pine and fruit flavors from Simcoe, Amarillo, Chinook and Nelson hops. Those last two weren’t in the version I sampled. A double IPA and Berliner weisse (which was days from debuting but tasted nice and lemony) should be along shortly.

Food-wise, starters consist of originals (fried goat cheese, fried sausages), rib-sticking usuals (sausage mac ‘n’ cheese), somewhat out-of-place Asian/Polynesian-inspired fare (seared tuna, chicken satay), flatbreads, and salads. I tried the chevre and it, like everything fried at Half Door, had a fantastically crispy texture thanks to golden-brown panko breadcrumbs. The slightly tart cheese becomes molten (fortunately, they warn you to wait a minute or so before digging in), which is nice, but the chile soy glaze doesn’t quite jibe with the cheese. Seems something fruitier, like what one might encounter with chevre on a fromage plate, would work better. Half Door’s Scotch egg, on the other hand, needs no improvement. A substantial layer of zesty, house-made sausage encases an egg that, though boiled and fried, maintains a bit of yolk integrity. The previously mentioned panko coating gives one more to love, as does a creamy horseradish dipping sauce. It’s like having a scrumptious breakfast as an appetizer. 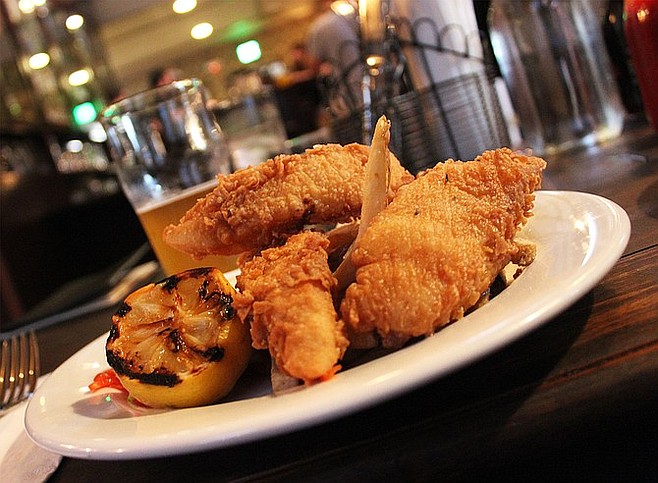 Fish and chips is another great offering that tastes and feels right at home in this pub environment. Both the cod and the breading are light and flaky, and thanks to a dusting of vinegar powder, the chips are firm instead of soggy, interesting instead of dull. A pork belly entrée is substantial and the accoutrements (mashed potatoes, greens, pork jus) are on-point, but the protein is overdone and bland. On the dessert front, white chocolate banana bread pudding is as delectable as it sounds, though an accompanying caramel sauce was too boozy for my taste. I suggest ordering it on the side and taking it easy.

Presently, only Half Door’s ground floor is open for business, but the upstairs level’s outdoor patio will be ready within the month. That will help to diffuse the crowds that regularly descend on this new business. But even with a consistent onslaught of patronage, the staff is extremely friendly and exhibits a swifter gait than most servers in and around the Gaslamp. Even half-done, Half Door offers a great deal of fun and promise.