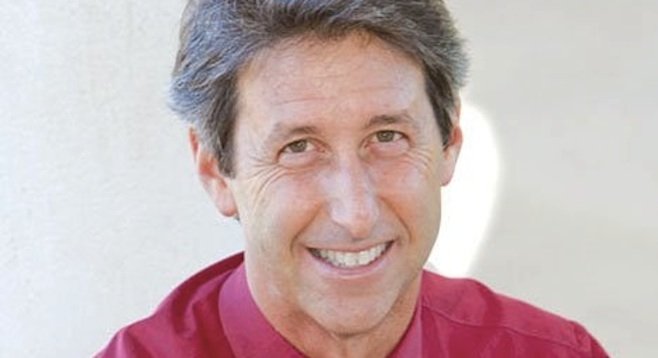 Michael Shames yesterday (August 27) won a lawsuit filed against him by the Utility Consumers Action Network (UCAN), which he had cofounded. UCAN had filed suit claiming that Shames owed it $450,000. By 11 to 1, Shames won and was awarded $141,00 he said he was owed.

In a statement, Shames denounced former UCAN employees and executive directors, as well as the Union-Tribune and the Reader. In a long internal conflict, the Federal Bureau of Investigation looked into allegations made by UCAN employees but it never filed charges against Shames.

In a previous dispute, Shames had sued a former UCAN employee and attorney, Mike Aguirre, for libel and other transgressions. Shames lost that case at the trial level and on appeal.

Author of Requiem, which highlighted the persecution and oppression of Russians under Soviet rule.

Michael Shames yesterday (August 27) won a lawsuit filed against him by the Utility Consumers Action Network (UCAN), which he had cofounded. UCAN had filed suit claiming that Shames owed it $450,000. By 11 to 1, Shames won and was awarded $141,00 he said he was owed.

In a statement, Shames denounced former UCAN employees and executive directors, as well as the Union-Tribune and the Reader. In a long internal conflict, the Federal Bureau of Investigation looked into allegations made by UCAN employees but it never filed charges against Shames.

In a previous dispute, Shames had sued a former UCAN employee and attorney, Mike Aguirre, for libel and other transgressions. Shames lost that case at the trial level and on appeal.

Composers of orchestral music have to trust the audience
Next Article

Gavin Newsom: A Governer we can all get behind... and push out of office

Just Wondering about those UCAN deposit accounts with the odd spellings, you know, the ones where the names were so similar an auditor could easily miss it. Who had control over those oddly spelled accounts? What happened to the funds they contained?

JustWondering: I followed that for the Reader but it just evanesced. It and a number of other alleged irregularities were reported to the FBI. The fact that the FBI did nothing may only suggest that it had other fish to fry. Best, Don Bauder

No, Don. The reason the FBI did nothing is because there was nothing to the story. Every single one of your allegations has been debunked. No exceptions. Yet, you are incapable of admitting that in your zeal to ferret out a scandal, you got bamboozled. The jury verdict (11-1) was decisive and based on documented facts.....not the empty allegations that you printed. There was no wrongdoing and I won every cause of action. I have no expectation that you'll be gracious enough to admit that you were wrong, but there's no need for you to continue to beat a drum that is bereft of skins.

And, further, you know that the reason the judge dismissed my defamation allegations against Aguirre was the "absolute immunity" enjoyed by attorneys who can say whatever they want with no concern for accuracy so long as it is directly or indirectly related to a lawsuit they did or may file. Don't pretend it was for any reason than that one.

Michael: I disagree with your points but you can't say we didn't give you the chance to make them. Best, Don Bauder

reporting something to the FBI does not make it any more important, just sounds good.

Murphyjunk: Agreed, but the FBI looked into Shames/UCAN for a very long time. Over more than a year, I was talking with people who had been interviewed by the FBI. Best, Don Bauder

This may be more a reflection of a weak trial attorney, or at least a weakly documented and weakly presented case, than the true merits of the case. It is also the sort of thing that can happen with a trial. Juries can do great work, but not all do, and again this could be a result of a dysfunctional jury. There was far, far too much "funny" stuff going on there to have been accidental or inadvertent. And who was running the show? Good old Shameless was the "boss hawg", the "head cheese", and the man whom nobody ever crossed. The really sad part is that UCAN was Mike for a long time, and it is so hard to separate him from the organization and what it did--and didn't do.

Any hope of a real criminal probe of UCAN has been dashed by all the time that has passed. And here we thought we had a real advocate for us as ratepayers in the SDGE service area, when in fact UCAN was toothless, and Shameless was lining his pockets with intervenor fees.

Visduh: Shames was not only lining his pockets with intervenor fees, he was taking a fat chunk of those fees. Best, Don Bauder

Mr. Shames is all over the internet, maybe a dozen web sites. He has an ego that just won't quit. Have a quick look at: http://www.splashstories.com/ and http://www.michaelshames.com/ where you will find links to many other sites. I think there is a part of him that really believes in consumer activism but there's another part that believes that Michael Shames is God's gift to humanity and he deserves lots of money because of that. A shame because he has energy and smarts that just get wasted.

swell: Is Shames all over the internet because Shames put himself there, or are others taking up the cudgels for him? Best, Don Bauder

Not enough information and no links.

Twister: I believe this blog item has enough information. It could link back to the dozens of items written about Shames and UCAN, but the reader interested in that past coverage could get it off our search engine. Best, Don Bauder

Don - One thing is for sure, UCAN and its Board has enabled SDG&E to be able to get rate increase after rate increase approved by the CPUC without any more than a token objection, so it is no wonder that the CPUC (and SDG&E) were only to happy to pay them "well earned" fees because for every dollar UCAN got the ratepayers paid thousands in ever increasing Energy bills,

When "consumer groups" rollover for those they are protecting ratepayers from, everybody loses except for the Utility, it's shareholdrs and the "consumer groups" themselves. The current intervenor fee "system" is FIXED and that is one of the first things that those charged with regulating the CPUC need to change, if they are really interested in making the CPUC actually fulfill its mandate of regulating FAIRLY, instead of what we have now which is a "rigged" system where ratepayers always get the short end of any deal.

CaptD: You have described how it works. The so-called reform groups play ball with the CPUC and get fat intervenor fees. Shames has been criticized for doing just that.

One example: by now, those following CPUC corruption realize that the CPUC under ex-President Peevey made sure that Mike Aguirre did not get intervenor fees, yet it was Aguirre who uncovered the corruption now being investigated by the federal and state governments. Aguirre said that Edison and CPUC were playing footsie in setting up the "rape of the ratepayer." Aguirre was absolutely right. He got no intervenor fees.

On at least one occasion, Shames wrote the CPUC and said Aguirre did not deserve intervenor fees. Best, Don Bauder

Rampant in NGO's. No Good Organizations? Caution, at least, is in order. The more vague promises, the less info about sources of income, details about how/where money is spent, unwillingness to post financials--all are danger signs. "Membership" organizations that have self-perpetuating boards and deny "members" the right to vote for board members are, by definition, not public, e.g., all the museums in Balboa Park (and almost everywhere else).

Fifth-columnists are inserted into all kinds of public and nonprofit organizations.

What was the basis of Shames' claim?

Twister: Shames got very fat bonuses on the intervenor fees. He argued that the board knew about those bonuses. UCAN said it didn't. Shames claimed that he did everything legally. Best, Don Bauder

Again, what we have here is a failure to communicate. All I've heard from Shames are generalities. If he's going to bother to post here, why doesn't he back up his generalizations so we can get the full story?

Twister: Good point. I can't answer his generalities because I don't know the specifics of his arguments. Best, Don Bauder