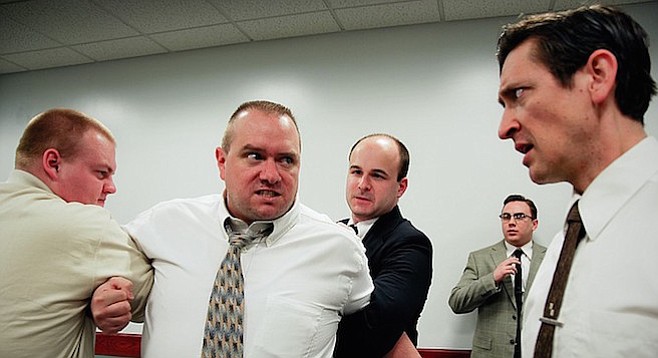 Classical music has been one of the main culprits of “trolling” for centuries. The 19th century was full of factions which went to war in publications regarding the merits of different composers and schools of thought. It was ridiculous.

Composers have routinely made comments deriding the abilities of their perceived rivals. You think rappers are bad about this type of thing? They’ve got nothing on composers.

I got a little taste of that 19th-century-style love regarding a post I wrote about a concert at the La Jolla Music Society SummerFest.

“If anything further were needed to confirm Harris's status as a blithering idiot (at least when writing anything about music), this so-called ‘review’ is it.” — Harry Kessler

“Why would you ask someone this ignorant to review a concert? There are plenty of good music writers around Southern California.” — Jack Van Zandt President at American Composers Forum of Los Angeles

“Eeeek. The Debussy is gorgeous and a most accessible piece. I cannot imagine someone with any musical sensibilities not taking to it on a first hearing. The Ravel is a masterpiece and anything but rug-pulling. And then he fails to tell us what the Faure was. Epic fail. [I replied] Garrett Harris how about learning to spell to start with? You are a pretentious ignoramus who has wangled his way into a writing job with no ability and zero taste.” — Brad Wood

“No, Mr. Harris, you are indeed not sophisticated enough.” — Brian Bunker

“Unmitigated drivel. By depth and vocabulary, this appears to be written by somebody randomly selected off of the street with no further consideration of qualification other than a preparatory statement of ‘I'll give you a ticket to this concert if you write something about it’. Zero insite, musical and artistic awareness nor even the most basic grasp of musical terminology. Had I not seen the name preceding the review, I'd have thought it was written by a slightly curious but entirely ignorant 16 year old. How dare Debussy (or any composer) not compose every work in the same fashion in the hopes that he keep worn socialites entertained in perpetuity.” — Derek Hurst

I’ve never met any of these five angry men but I feel like they’ve known me my entire life. They’ve managed, without ever interacting with me in anyway, to identify my deepest, darkest secrets. They’ve illuminated those parts of myself which I’ve kept hidden away in the recesses of my complete ignorance. I’m kidding — mostly.

Here’s the thing. We’re all supposed to be people who love classical music. We would all probably get along great if we were in a room and had a discussion about music. There would be differences of opinion but it would take a long time and a lot of beer to achieve the tone of these comments. The tone of these comments sounds like a pub in Belfast when everyone is “in their cups” at two in the morning.

Classical music is not Camelot. It is subject to the same trends and behaviors that everything else is. My replies to those comments weren’t worthy of the Buddha. Can’t we treat each other better?