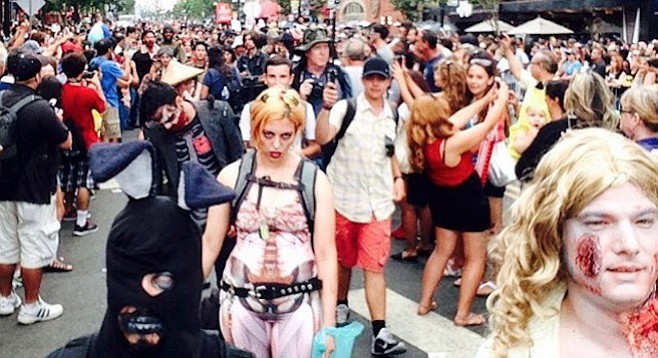 Brains…if only the city had brains

The City of San Diego failed to protect motorists and the hundreds of wannabe zombies during last year's Zombie Walk. The city also failed to obtain the permits required for any parade or procession with 75 or more people.

Doing so, says an April 24 lawsuit, resulted in a confused, scared, and deaf driver, Michael Pocci, running over a woman who was taking pictures of the Comic-Con affiliated event.

The lawsuit, filed by passenger Alexandria Antonio, Pocci's future sister-in-law, claims that the city failed to obtain permits and names several of the parade participants, some of whom sat on Pocci's car and smashed the front windshield.

On July 26, 2014, Pocci, Antonio, and her sister April with her eight-year-old-son, were driving through downtown. They found themselves in the middle of an estimated 600 zombie enthusiasts, who shuffled east along Island Avenue in the Gaslamp Quarter. The crowd clogged the street, stopping traffic. Pocci and his passengers were unable to move forward. Marchers began to hit the car, and one person attempted to open the car door.

Besides Pocci’s impaired hearing, Antonio and her sister have been diagnosed with Usher syndrome, a genetic disorder that often results in deafness and loss of vision.

"Because Mr. Pocci and his two adult passengers were deaf, they could not meaningfully communicate with any of the members of the crowd outside the vehicle,” reads the lawsuit. [Pocci] became increasingly confused by the traffic stoppage created by the parade...[participants] were lurching like corpses and wearing gruesome makeup, torn and disheveled clothing, and large amounts of fake blood. Feeling trapped and also concerned for the safety of his passengers and himself, and feeling pressured from the vehicles behind him, Pocci honked his vehicle's horn and inched his vehicle slowly into the intersection in an attempt to part the crowd and cross Island Avenue.

"Overcome by fear that defendant number one, and other members of the crowd of people blocking the streets, would enter the vehicle and cause injury to himself and his passengers, Pocci attempted to leave the scene by continuing to honk his horn and by inching forward. As he did so, participants and spectators in the parade made threatening gestures, further causing Pocci to fear for the safety of himself and his passengers."

Pocci accelerated, running over Cynthia Campbell who was there taking photos of the event — Campbell has since filed suit against the city for failing to have a permit for the event; she is suing Pocci also for the injuries she suffered.

Attorneys for Pocci say that the responsibility falls on the city to ensure the safety of parade members and other members of the public.

"...[The city] as one of the entities responsible for planning and organizing the parade, was responsible for ensuring that it did not create an unreasonably dangerous condition or an unreasonable risk of harm to participants and spectators. However, neither Defendant City nor Defendant Zombie Walk obtained a special event permit from the City Manager as required by San Diego Municipal Code...for a parade or procession consisting of more than 75 persons."

Is it a legal defense for running somebody over if you're a hearing-impaired driver caught in a parade or procession of zombies in the automotive right-of-way?

Was Chief Zimmerman aware that Zombie Walk had no permit?

A permit is a piece of paper. What would that have done? "Hey, look, we filled out some forms and wrote a check, everything's OK now!"

A permit in and of itself would have done nothing just like a restraining order never stops anyone who is intent on completing their mission. In this case everyone shares some of the blame. Only one person was injured and the rest have no dog in this fight including the DA who is just trying to help out the city by assigning criminal blame on the driver. Let the drivers insurance company and the injured woman sort out who pays for what.

But if they had obtained a permit, wouldn't that have meant better traffic control from the SDPD?

This whole mess was a complete lash up. Without a parade permit why was traffic allowed to be interrupted? Where is the law in this? Are people allowed to block traffic just because they bring money into town?

Comic Con is fun but it doesn't overrule the laws of the city nor does it overrule the rights of our citizens. If they want to have parades let them get permits and close the area around the Civic Center down to traffic all together.