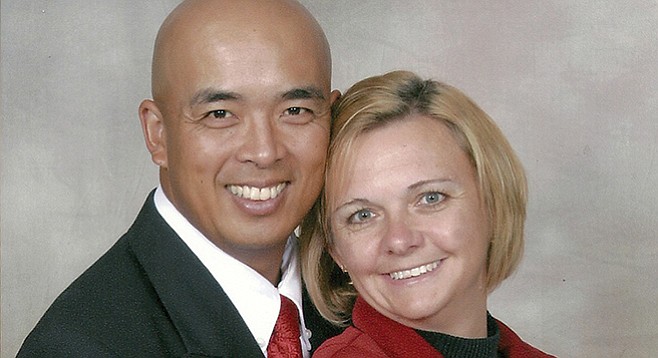 All about Jesus Christ

San Diego Reader: What is your favorite subject on which to preach?

Pastor David Cajiuat: Jesus. Really, the Bible, from Genesis to Revelation, is all about Jesus Christ. You could see Jesus from the beginning of Genesis. “In the beginning, God created the heavens and the earth…” That word “God” — Elohim — is a plural word which speaks of the Trinity — three-in-one. So, I preach Jesus and the death, burial, and resurrection of what he has done for mankind, for the souls of man...[it]excites me in my preaching.

SDR: Why did you become a minister?

PC: As soon as I came to trust Christ as my personal savior, on March 17, 1990, in my apartment room in Pisa, Italy. I surrendered to God then that I would proclaim the gospel until I die. Four months later, I surrendered to train. The call to preach is the call to prepare. I was still in the Air Force, and I applied to Ambassador in [North Carolina], and tried to get there as soon as I could.

SDR: What’s the mission of your church?

PC: The mission of Metro Baptist is threefold. Ultimately, to exalt and glory our Lord Jesus Christ in all we do. Second, edify believers and help the church to grow and disciple them. Thirdly, to evangelize those who do not know Christ as their savior and give them the good news.

SDR: In 2009, my two sons were in a severe car wreck, and my youngest one, who was 13 at the time, escaped with cuts and bruises, but my oldest son, who was 17 at the time and was driving, was not as fortunate. He sustained a crushed pelvis and traumatic brain injury, where more than a third of his brain was damaged, including the frontal and right temporal lobes. He was in ICU for 36 days and a coma for 17 days. In those difficult times when we didn’t know whether he was going to live and his brain was swelling and possibly going to shut down his internal organs… It was during that time that I knew God’s comforting hand was upon us. Our family could have easily crumbled and we could have easily turned our backs on God, but we found peace in him, and it brought our family closer together. We saw God’s hand work in so many ways, from seeing our son’s fingers move for the first time since the accident to his understanding basic commands. And now, five years later, our son is in college.

SDR: When it comes to mankind, there are two places that they can go. One is heaven, for those who put their faith and trust in Jesus Christ. But for those who don’t, according to what the Bible says in John 3:18, “He that believeth in him is not condemned, but he that believeth not is condemned already because he has not believed in the only begotten son of God….” In Revelation 20:11–15, it speaks of the lake of fire and so that’s the other place that those who don’t know Christ as their savior will go. That’s not what I say, but what the Bible says.