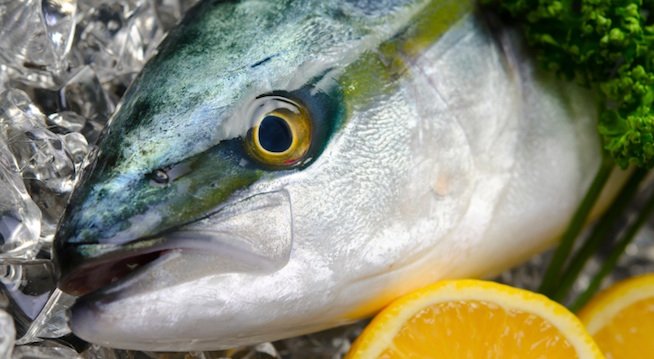 Yellowtail bite in full force south of the Coronados

Seems as thought there is not much of a yellowtail bite for the 1/2 day boats off the San Diego coast, though the kayak anglers are getting a few all the way up the line to Malibu. There have been some decent white seabass and halibut caught as well in the local waters. 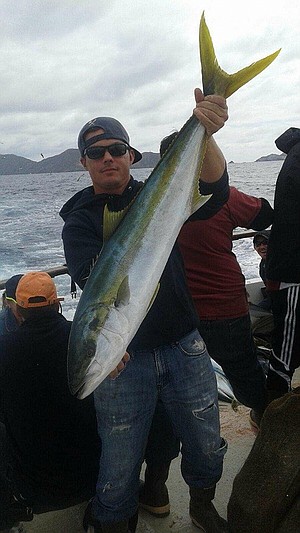 Yellowtail caught on the Malihini on April 24

The yellowtail bite just 20 miles south at the Coronado Islands, however, is going on in full force, with many 3/4 day boats getting limits of the large jacks. Further offshore, bluefin tuna are still being found roaming the banks, especially around the Cortez and Tanner and the up and down offshore fishing has been good for rockfish, sheephead and lingcod.

Rockfish have been solid up and down the coast inshore, with the cooler thread of water south of Punta Banda producing quality lingcod and reds within a couple miles of the beach.

I guess the weather warmed a bit and folks decided to get out there yesterday, here are the counts from Friday:

11 anglers at the rail aboard the Chubasco II 1/2 day am run caught 1 yellowtail, 4 sculpin, 39 rockfish and 79 calico bass. 50 of those calicos were released.

The Pronto 1/2 day am run with 14 anglers aboard reported 2 lingcod, 20 rockfish, 12 calico bass and 2 sculpin caught.

35 anglers at the rail aboard the Dolphin 1/2 day am run boated 6 sculpin and 90 rockfish, 29 of them vermillion rockfish. Their pm 1/2 day run with 22 anglers aboard returned to the dock with 46 rockfish, 1 calico bass and 10 sculpin in the gunnysacks.

rockfish, 30 bonito, 15 barracuda and 30 yellowtail* over the rail.

The Malihini ran down to the Islands for a 3/4 day run with 25 anglers aboard and whacked 'em, getting limits of yellowtail (125) and a handful of bonito.

The Premier 1/2 day morning run with 17 anglers at the rail reported 45 rockfish and 2 lingcod caught.

12 anglers aboard the Mission Belle 3/4 day run south of the border caught their limit of five apiece, boating 60 hard-fighting yellowtail.

The San Diego 3/4 day run to the Coronados with 35 anglers at the rail reported 127 yellowtail and 1 halibut caught.

The Point Loma, fishing just off it's namesake on a 1/2 day outing with 33 anglers aboard, returned to the dock with a total catch of 2 sculpin, 68 rockfish, 8 vermilion rockfish, 49 mackerel, 3 lingcod. 3 halibut were also caught and released.

The morning 1/2 day run for the New Seaforth with 26 anglers aboard produced 135 rockfish, 92 of them the vermilion variety, and 1 sheephead, while their afternoon 1/2 day run with 19 anglers at the rail reported 1 ocean whitefish, 1 sheephead, 1 sculpin, 30 rockfish and 38 calico bass caught. 30 of the calicos were short of the 14" size limit and released.