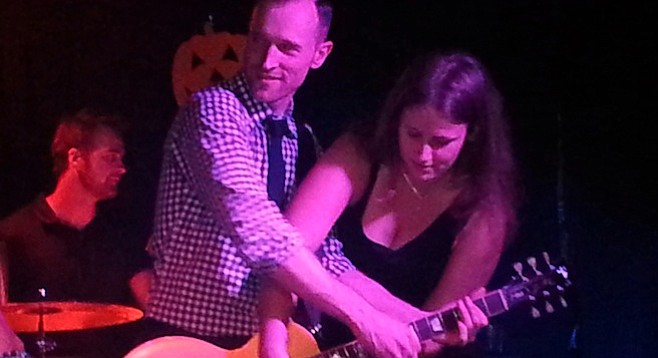 JW-Jones has got your blues right here!

Canada band heats it up at Tio Leo's

If you haven’t heard about Canadian bluesman JW-Jones, you’ve got to get out more. The Ottawa guitarist picked San Diego as the last stop on a ten-day West Coast romp and he made it perfectly clear he was here to torque the thermostat. Together with his airtight rhythm section, bassist Laura Greenburg and drummer Jamie Holmes, Jones generated some serious Thursday night heat at Tio Leo’s.

The show centered on Jones’s new Belmont Boulevard disk, but he and his band worked through an abundant and energetic music catalogue. From the edge of rock to a fine, whispery slow blues JW-Jones can and will do it all. (I could have sworn I heard the theme from The Flintstones, but that could have just been the alcohol.)

One particular highlight was their drift into a tasty 12 bars or so of “Sunshine of Your Love.” However intended, it was a classy tribute and nice “In Memoriam” for the recent loss of Jack Bruce.

Did I mention the musicians are interchangeable? During the set, the players took momentary trips into each other’s orbits. At one point there were six hands playing one guitar. Then Jones got behind the drum kit while Holmes was walking bass lines, and Greenburg strapped on Jones’s six string to tear off about five minutes of “I’ve got your blues, right here!” Everyone in the club was on their feet either screaming or staring slack-jawed.

The JW-Jones band is still on the road and continues to tear gaping holes through the U.S.–Canadian border. So, get off the couch, get back on the grid, and plug into JW-Jones.