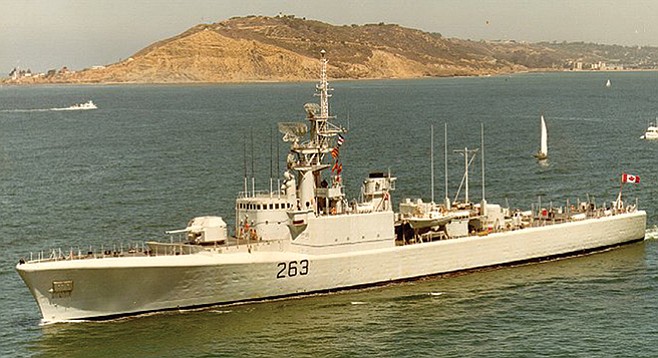 Back to the Yukon

The diving wreck HMCS Yukon is located about two miles off the coast of Mission Beach and about 107 feet down (depending on the tide). The Yukon sank 1.8 miles off Mission Beach on July 14, 2000. An unexpected large swell the night before the planned sinking knocked out the temporary plywood coverings, and the ship went down on its side.

Five divers have died around the wreck since then, only one while inside the ship. The last person to die while scuba-diving the Yukon was Staci Jackson, an experienced diver and a Marine at Camp Pendleton. The San Diego Medical Examiner’s Office ruled it an accidental death: it appears that, because of the rough surf, a surge threw Pendleton against a metal bulkhead and knocked her unconscious. That accident happened in December 2012. The same month, the Reader published a piece I wrote titled “Why the Yukon will continue to kill divers.”

That story upset a lot of scuba divers. They felt I sensationalized it by linking the Yukon to the scuba-diving deaths. Some of the comments were specific. “Terrible article with incorrect facts and opinions formed by a complete lack of knowledge.” “Why are you writing an article on a subject you obviously know nothing about?” Another one: “The author claims to be a certified diver. Well, an open water certificate and 2 open water dives gives you that claim, but by no means does it qualify you to write articles like this.”

I decided the only fair approach is for me to put on a wetsuit and head on down. I am a certified diver, but I have not dived for over 15 years.

What makes scuba-diving the Yukon more dangerous than most dives is primarily because it is a deep dive. Normal recreational divers limit their depth to about 60 feet. At 100 feet, nitrogen narcosis (caused by the large amount of nitrogen in the blood at that depth) can make a diver feel drunk and do strange and sometimes dangerous things. Only one of the deaths was from someone entering the wreck. Most of the divers drop down next to it. However, there is a strong surge in the ocean and the visibility can be poor. It is easy to become disoriented and make mistakes.

My certification course is already scheduled at Dive California dive shop in Point Loma. My friend Jason, a former scuba diver, has decided to join me in the recertification class and the dive to the Yukon.

Continued: Back to the Yukon Part 2 | Part 3