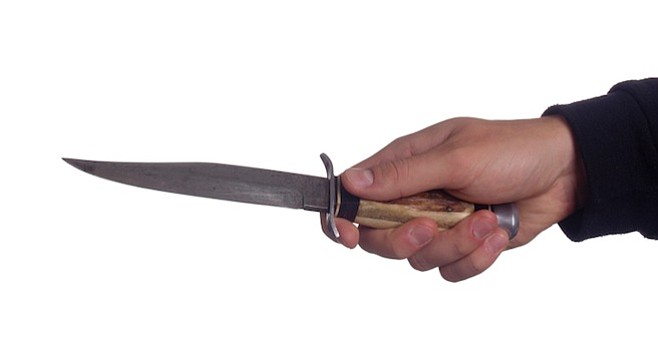 The Starbucks at 845 College Boulevard was the site of an attempted stabbing on November 5. Oceanside police reported that around 8:20 p.m., Sandy Rivas looked outside the store’s window to see her 16-year-old son being confronted by two teenagers. The male and female were both holding knives.

She saw the male teen lunge at her son, swiping at him with the knife. Rivas ran outside and confronted both the attackers. The male teen reportedly spit on her and both suspects ran away.

Oceanside police found the female suspect hiding behind the Starbucks in a marshy field. With the help of sheriff’s helicopter, the male suspect was eventually spotted when he tried to run away from the area.

Both suspects were positively identified by witnesses and arrested on suspicion of assault with a deadly weapon. Neither Rivas nor her son was injured.

Oceanside Police spokesperson Lt. Leonard Cosby reported the male juvenile was wanted on a probation violation warrant out of Arizona.

While the 16-year old victim denies knowing his two assailants, an officer on the scene formerly served as a school resources officer. The officer reportedly identified the three as regular acquaintances while he served at their campus. The investigation continues.

When seconds count, the Police are only minutes away. Get some self-defense training and your concealed carry permits, San Diego, the prisons are about take a dump on you.

Yeah, "the investigation continues." It is likely that they were acquainted, but not necessarily in a good way. Don't you just love Oceanside? That part of the city is newer and not yet considered blighted or gang-ridden. When those two don't show up for class on Monday at El Camino High, the school can figure it out.

Oceanside is a crime area that needs to be seriously looked at. I am tired of reading about the criminals in Oceanside. Why don't we do something about this? The time is come to heavily crack down on this city's drug and criminal population and make it safe for its citizens. Let's start with the gang violence committed by teenagers there. Do something now before it becomes even more unmanageable. El Camino High School is probably out of control as far as drugs. DO SOMETHING