On July 21, between the hours of 3 p.m. and 4 p.m., activity at the La Mesa Starbucks (located on the corner of Kiowa Drive and Lake Murray Boulevard) was investigated by the La Mesa Police Department. The two police cars that pulled up on Kiowa Drive had come in response to a young woman’s 911 call for help when a young man tapped the woman on her shoulder as she was working on her computer. As she turned, the man grabbed her computer and ran. Everyone around was in shock, including the victim. She was sitting outside enjoying her drink, not suspecting any type of wrongdoing. With all the people around, no one would expect this to happen. However, Juan, a longtime Starbucks employee, commented that this was not the first time that this had happened. 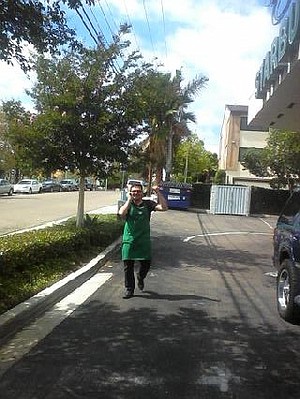 Starbucks employee calls police after computer is stolen from a customer

The police, Cindy (the manager of Starbucks), and Juan all remembered that a similar incident had happened at this same Starbucks just a week earlier. Cindy tried to comfort the young woman, who was still in shock, saying she was sorry that this happened. She commented that she had requested that the La Mesa Police drop in every afternoon for drinks just so they could keep an extra eye on the place. She said that the police had not had the chance to do that. She was now going to put in another request for extra patrol.

Juan, another man, and another lady had all tried to chase the robber down, but everyone saw him disappear when he ran behind the tall bushes in front of the Kiowa Apartments, located at 5545 Kiowa Drive. Juan and Cindy remembered that this was exactly where the criminal ran last week. They couldn’t be sure, but after the witnesses gave their description of the criminal, the police thought he was the same man as last week.

The victim, a man, and another lady all described the robber to La Mesa Police Officer J. Gaughran, pretty much the same. All three saw him as a light black man between the ages of 18 to 20 dressed in a bright red-and-black t-shirt with a very athletic build. The female witness added that, in her opinion, the robber looked exactly like Chris Brown, the singer, and that he should be easy to identify. The cop laughed and said that he knew who Chris Brown was. The witnesses said they would be glad to identify him if he was caught.

At 4 p.m. the police left, and the customers were still talking about how no one would think about being robbed while enjoying their café mocha. The outside tables seemed to be the most dangerous. Still, the coffee shop seems to always be busy. The unlucky table in both instances was the one in front of the shop closest to the drive-thru (west side of the building). So, when you sip your drink, hold on to your computer.

This case is still under investigation.