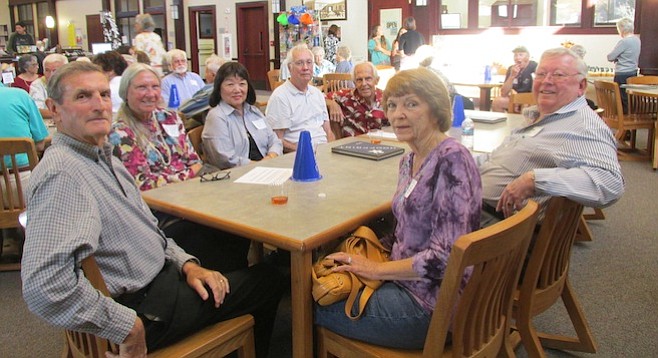 Any Pebble Pups in the house?

About 60 alumni from San Dieguito High School gathered on November 6 to celebrate the fourth annual “founders” reception — graduates from the Encinitas school’s first classes of 1937 to 1942.

The class of 1944 took the opportunity to also celebrate its 70th reunion, as did the class of 1954 — its 60th. Unfortunately, the four remaining members of the Class of 1939 were unable to attend. It would have been their 75th class reunion.

A perusal through the 1954 San Dieguito Mustang yearbook (class members called them “annuals”) showed a variety of clubs, such as Jr. Red Cross, Military Cadets, Reading Club, and Pebble Pups (a science and geology club).

The yearbook says San Dieguito High was, “the first school in the nation to have a traffic court club.” Local judge Vincent Vint would come to the campus to adjudicate problems with teen drivers. The club, made up of seven boys, would sit in on the discussion and weigh in on the situations of their violator peers. The club was formed because of complaints from the school’s residential neighbors about the teen drivers.

During high school, Class of ‘54s Rosalie Zurcher’s family owned the Hillman Dairy in Carmel Valley. Her grandfather had divided up plots of land for each family member, each receiving 40 acres. After the death of her father, Rosalie’s mom built the family’s home from the ground up, by herself. The home, barn, and farm were eventually demolished to make way for I-5 in the early 1960s.

Jim Kennedy worked at the downtown Encinitas Mobil station. He pumped gas, lubed cars, and eventually became the manager at age 18. His wife Lois, whom he meet at school, worked at Bill Jack’s manufacturing plant in the old Quonset huts that are now part of Solana Beach’s Cedros Design District. The firm manufactured high-tech components and helmets for the Air Force.

Lois’s favorite beach was Pillbox, named, she says, after the “pillboxes” mounted on the bluffs — stations where the spotters for WWII Japanese airplanes would sit.

Growing up in the area in the 1960s and ’70s, my friends and I always thought Pillbox beach was named because that’s where the druggies hung out and exchanged narcotics.