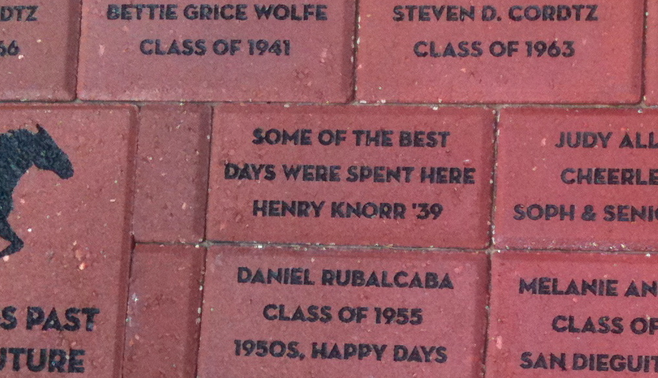 Lost school alma mater heard for the first time since '96

“I knew someday I’d be the last person from my class,” said 92-year-old Del Mar resident Henry Knorr. “I just didn’t expect it to be so soon.” Knorr was a member of San Dieguito High School’s graduating class of 1939. 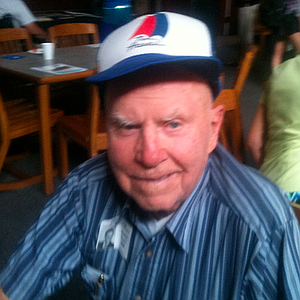 He was also the oldest attendee at an October 22 founders’ reception held on-campus by the school’s alumni association. The event was to honor and reminisce with alumni from the school’s first graduating classes (1937–1942) and to unveil the first phase of engraved "legacy" brick pavers. The first 100 bricks were recently installed around the school’s bell tower.

Back in the 1930s, most area students living in what is now known as La Costa and south to Carmel Valley started junior or senior high school at the school known as Carlsbad-Oceanside High. In 1937, the new San Dieguito High School’s first graduating class (30 members) marched to "Pomp and Circumstance."

Known as the Mustangs, the school's 1937 “Hoofprint” yearbook received congratulations from 58 area businesses. Each of the advertised businesses listed only a two- or three-digit phone number. Of the numerous cafés, mechanics' garages, and neighborhood markets, only two businesses remain 76 years later — La Paloma Theatre in Encinitas and R.E. Badger, an agricultural management firm in Rancho Santa Fe.

During the brick-paver dedication on October 22, four saxophonists from the school’s current band played the long-lost school alma mater, “Oh Hail to San Dieguito.” The tune’s arrangement had been lost when the campus converted a from high school to an academy in 1996; it has not been heard on campus since then. Band director Jeremy Wuertz researched and eventually found the two-verse song.

About 50 fellow alumni, teachers and staff, and current students attended the brick unveiling. Henry Knorr’s had his brick inscribed, “Some of the best days were spent here.”

The school still IS a high school, albeit with an altered name. When the district opened its newest comprehensive high school in the 90's, La Costa Canyon High, the original plan was to sell the San Dieguito campus. But with burgeoning enrollment, that wasn't feasible, and the old school was kept open on a reduced basis, and not as a comprehensive high school. Instead, they deemed San Dieguito High School to have gone out of existence, and the newly-christened San Dieguito Academy High School to begin operations on the same campus. It does things a bit differently than the other big high schools in the district and nearby, and doesn't offer everything you would expect from one of those schools. But it is still there teaching 9 - 12 graders. How it compares to the school those pioneer alums remember, it is hard to say, but likely the atmosphere is quite different, as is the community it serves now.

Hey Visduh, While your formation of SDA history is correct, it should be noted that for all intent and purposes SDA is normal high school. All sports have returned except football and wrestling. The only difference is that one has to apply to attend for their freshman year, and its an accelerated academic program. But SDA has cheerleaders, band, clubs, ASB, all the makings of a normal high school.

I haven't paid close attention to SDA for a number of years, and I cannot argue your points. If you check out the district's description of SDA (and the much newer Canyon Crest Academy) I think you will find that it does not claim either school offers a full board of courses and activities. SDA has had a lottery for about as long as it has existed, which brings one a question of why people are competing to attend that ramshackle campus. In a couple other ways, it really is not such a wonderful school, yet plenty of students and parents are still quaffing the Kool-Aid about its greatness. (I could tell you stories from a few years ago.)

If you agree that it is still a high school, why does the sub-headline of the story read "Back then it was a high school"? That implies it isn't one now.

I didn't write the headline, but I think that's the general confusion by the public with the name "academy." The lottery hasn't been needed the last 4 out of 5 years, although it is still done. Everyone that wanted to get in did, but it may not have been til a few days before school stated that they knew all were accepted, due to attrition, people moving, decide to go to LCC, etc. I'm an SD alumnus with a current sophomore enrolled, and I see no difference when I visit campus. The track/field is under complete remodel, and new gym will be built with Prop AA $, along with a two story math and science building. And guess what the most popular classes are? Auto, wood, and metal shop. I didn't even know they still existed until my son enrolled there.

As far as those shop courses are concerned, that campus was the only one that had the facilities. They certainly didn't put SHOP rooms into Torrey Pines! LCC didn't get any either. I'm happy to learn such things are still available in that district. And I understand that gradually the old WPA-built rooms are being replaced. They were not built for the ages, and have been in service for far too long. Just hope that when they replace those shop facilities that they don't eliminate them completely.

The original 1936 buildings that face Santa Fe Dr will not be replaced, only updated for technology and A/C. If those old wooden floors could talk??????

The District keeps a Prop AA page with links to current renovation projects; anyone may read these documents to learn what's going to change at San Dieguito and -- just as important -- what's not going to change: http://www.sduhsd.net/About-SDUHSD/Department-Listing-/Facilities-Planning-and-Construction/Master-Plans/index.html

I didn't see the original headline, but back when Mr. Knorr attended, it was a junior high/high school combo: San Dieguito Union High School (SDUHS), educating 7th through 12th graders.

When Earl Warren Junior High opened up in 1954, SDUHS ceased being a union school and became a high school -- but the name didn't change to San Dieguito High School (SDHS) right away. The word "Union" remained in the yearbooks until 1968, and in the diplomas until 1978.

I'm attaching a photo of the school from the 1938 Hoofprint... this is what it looked like when Mr. Knorr walked its halls as a student! It still looks very much the same. 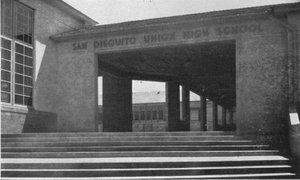 The front of San Dieguito Union High School (SDUHS), from the 1938 Hoofprint yearbook.