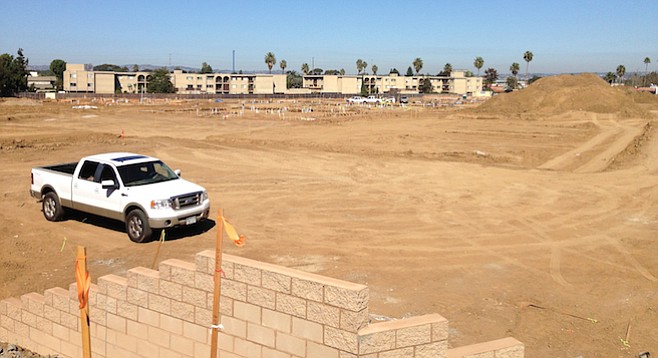 If they build it, you can retire early

Construction is under way at the former site of Barnard Elementary School in Point Loma, which was demolished to make way for a 9.5-acre, gated apartment complex. The San Diego Unified School District voted to sell the property two years ago — a "desperate attempt to generate revenue" in the face of budget shortfalls, according to a U-T reporter at the time.

Stepping in to purchase the property was the Monarch Group, a La Jolla–based real estate developer responsible for building similar properties in Carmel Valley and beside Lake Miramar in Scripps Ranch. Monarch picked up the Barnard site at auction for a reported $16.5 million. 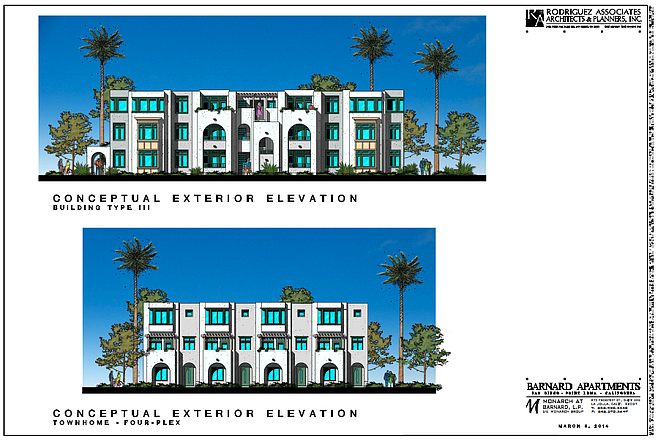 Monarch plans to open the new complex in January 2016, and will hire a property-management firm to rent the 180 units, which will consist of one-, two-, and three-bedroom apartments, as well as ten townhomes. Plans call for 19 residential buildings in all, plus a recreational building that will contain a fitness center and “teaching kitchen.” Other amenities include an artificial-turf dog park, shared outdoor areas, community grills, and a swimming pool.

A representative of the Monarch Group said that due to the site's existing zoning (a large apartment complex is across the street), no traffic impact study would be required; also, each of the rental units would include a garage space. He said it's too early to gauge what asking rent will be amid an early 2016 market.

The cost of construction looks to hit the $30 million range, on land purchased for about $40/sq. ft. The school district handled the demolition of the school buildings that previously occupied the property, but a San Diego Unified rep could not provide a dollar amount for the cost of doing so.

Barnard Elementary, officially known as Barnard Asian Pacific Language Academy, moved to the former site of Bayview Terrace Elementary in Pacific Beach at the beginning of the 2013 school year. The Mandarin-language magnet school only briefly occupied the Point Loma campus, which was built during World War II as a school for children of Navy service members.

During the same meeting the school board voted to move the Pacific Language Academy, it moved on a resolution to sell the original Barnard site. Ultimately deemed "surplus property," the aging school site was sold and the majority of the income generated was used to pay the annuity on the school district's 2009 SERP (Supplemental Early Retirement Plan), which granted early-retirement incentives to a reported 1031 district employees; a 2014 SERP program enrolled another 458 early retirees.

Both SERP incentives were created to reduce the annual budgets of the school districts during their respective years, meaning SDUSD has taken to selling property to cover budget shortfalls pertaining to previous years' budget shortfalls.

In May 2013, the school district voted to liquidate an additional two-and-a-quarter acres of coastal property to developers, selling the site of the Mission Beach Elementary School campus to another La Jolla developer, McKellar-Ashbrook, for $18.5 million.

And what will they do when they need property?

Not to worry they never think beyond the tip of their nose.

Not to worry they never think beyond the tip of their nose.

SDUSD has been sitting on a number of campuses that have not operated for many years. Back as far as the 70's, there were one or two such sites in the Allied Gardens area, and I'm not sure that they still aren't holding them. Point Loma and Mission Beach land is worth a mint, and we can at least hope that they were sold for a proper price, and not given away to some favored developer for twenty cents on the dollar. (In fact, I'd like to see a comment from someone more knowledgeable than I as to the worth of the two sites mentioned.)

It is so true that that district, at least, doesn't look far ahead, and lacks any sort of master plan for adding and deleting campuses. It is always in a reactive mode, and highly politicized. It has closed campuses in the face of rising enrollment, and created new ones in the face of declining enrollment. (I must digress here to point out that the Vista district finally passed a bond issue in the early 2000's and rapidly opened six (count 'em) new elementary schools, even as enrollment had peaked and was declining. Since then they have closed two elementary schools, and there's another one that could easily be closed. So, it isn't just San Diego that screws up.)

School districts should not be playing property speculation games, but that was what was happening with San Diego. That school in Mission Beach was closed for many, many years, yet there it sat smack in the middle of one of the costliest areas of the city, underutilized if it was used at all. It was only when they were in a "world of hurt" that the district finally decided to actually sell some of its excess property. I found this post valuable in that the funds generated went to pay for SERP, an interesting concept itself.

If/when the district ever needs more schools in those areas of the city, it will be hell to pay, in that assembling large parcels will be breathtakingly costly. Like as not, that will never happen. But some sort of real plan for this sort of thing would be a wonderful thing. But that planning is really hard work, and school board members don't like hard work any more than they like political controversy (whenever they can avoid it.)

I tried to figure out what the worth of such property should be, but considering undeveloped property in Point Loma only usually exists as a hypothetical, the real estate savvy people I reached out to didn't feel comfortable speculating. The math says it went $40/sq ft for the undeveloped property, with construction costs adding near $75/sq ft, meaning the post construction investment for Monarch would be $115/sq ft at ~$47 million.

If they turned around and sold it for double that (a simplistic estimation, I know), that would raise it to $230/sq ft. Looking as sites like trulia.com and zillow.com, I see single family homes in the PL area on the market for closer to $400/sq ft. Not scientific or reliable, but safe to assume it's a pretty reliable long term investment for Monarch, with rental income likely to hover in the $4 million range annually, presuming an average rent of $1800/month (which seems to be the figure going around currently).

Perhaps more telling is that SDUSD would have sold the Barnard St. property for as low as $10 million (&lt; $22 sq ft). Clearly the Mission Beach property proved more valuable, at closer to $190/sq ft.

Again, all I can do is simple math, which is why I left this stuff out of the article. Valuation's best left to people above my pay grade, and presumably above those of school board members too.

The School District and its Board of Education sell off property that could be long-term leased (and even developed) and continually bring money into the system. That they squander such resources is criminal.

At the present time, Labor has a lock on the Board of Education with all five trustees enjoying full Labor Council support in campaigns. These people will make decisions about how to spend new tax dollars coming down from Sacramento as part of Governor Brown's "local control funding formula." School trustee Richard Barrera is himself a walking conflict of interest: he heads the AFL-CIO Labor Council which includes the local teachers' union SDEA. He and another school trustee have been unopposed in their recent elections.

Generally this Labor School Board favors property sales to finance employee retirements (or soon-to-come employee raises) and, secondarily, to foster private development which always benefits the building trades. It's also fair to say from the evidence that this School Board's lowest priorities are small class sizes to benefit children's learning and providing any support for high-performing strong principals.

The function, and only function, of a school district is to run schools. They were not set up to hold property and lease it out. When they get into such activities it is a distraction to the mission. (Consider the recent tussle that went on for about ten years in regard to the closed school site in old Encinitas. While the school district hung tough until the city caved in and paid too much for the site, it isn't clear just how costly the legal work was. We can be sure it was considerable.)

Surplus property should be sold off to the highest bidder in an orderly manner (probably auction) within a couple years of the time it is determined to be unneeded. Things get messy when they play games with the property, and end up costing the taxpayers instead of benefiting them.