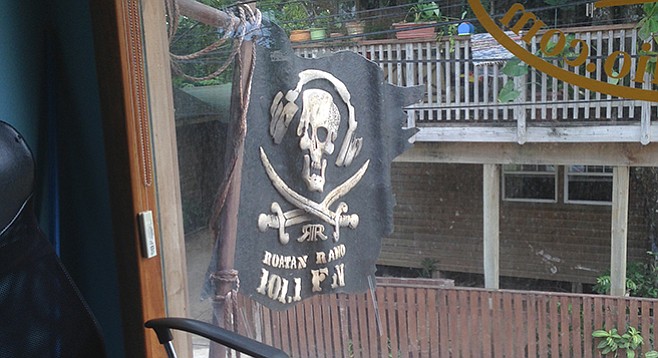 If life hands you lemons...go buy a radio station in paradise.

Keith Miller discovered a few months ago that the shrinking local radio industry that had employed him for 25 years had shrunk him out of his morning gig at KPRI.

Known as Madison to his listeners, Miller started at the now-defunct classic-rock station KCLX in 1989. He joined KPRI in 1996. That station later adopted the triple-A (adult album alternative) format. “We would play artists that Top 40 wouldn’t touch.... We had Imagine Dragons at the House of Blues when no one had ever heard of them...Jack Johnson at the Birch Aquarium... We had the Spin Doctors, Jason Mraz, Colbie Caillat, and Donavon Frankenreiter on our Hornblower private listener cruises.”

Miller tells the Reader that the “radio pie,” or the total amount advertisers spend on radio, keeps shrinking. Plus, “I’m 55. I’m not even in the 25-to-49 demo. I began looking at options. Something fun I could spend my life doing. I googled ‘best affordable places to retire in the tropics.’ I found Roatán. One of the most beautiful tropical islands no one knows about.”

Miller vacationed at that island 50 miles off of Honduras in April. “It’s always 85 degrees. The waters are aqua blue and the sand is powder white.”

The lifelong radio guy discovered Roatán had three radio stations. He bought the English-speaking one.

“I’m doing something there I always wanted to do here but couldn’t afford to.”

Miller says the island’s affordability allows him to follow his dream, and his technical, marketing, and on-air savvy will allow him to operate 101.1 FM. He says he will play rock “for American, Canadian, and Italian ex-pats.”

He says 50,000 to 75,000 people live on Roatán, “depending on who you believe.... It was colonized by England, which hired privateers to pirate the Spanish. Talk about your pirate radio...”

He says the station, which he says is breaking even, has all the necessary equipment. “It’s not exactly Gilligan having the Professor repair his transmitter.”

“There is no disc jockey in the world who hasn’t said, ‘I could do this a whole lot better if the station was mine.’ Now I get a shot.”