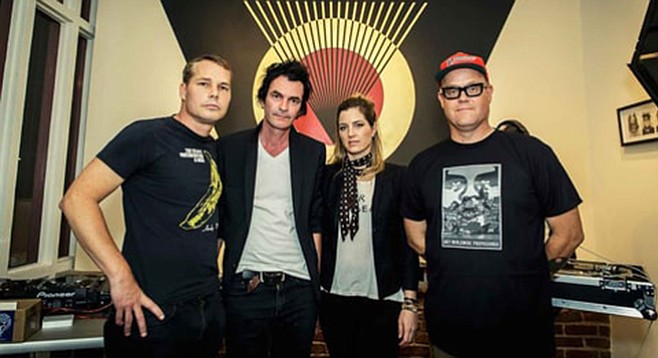 According to former Crash Worship member John Goff, everyone knew there was no future for his band after Great White’s 2003 Rhode Island nightclub gig that ended with 100 fans dead from a raging fire started by pyrotechnics.

“They started in 1986,” says Encinitas native Goff, who says he was asked to join Crash Worship because he played bagpipes in high school. “They would use fire extinguishers filled with pig blood at their shows. They would have underwater explosives that would spew house paint. I was there when part of the Ché Café caught on fire at one of their shows.”

By the time Crash Worship was over, Goff had already moved on to launch his own projects, like “wacked-out noise” band Johnny Superbad & the Bullet Catchers. Then came Physics — “We had one rule: you could do anything as long as you played it in one key.”

Goff went on to produce records by Rob Crow and Heavy Vegetable for his own Way Out Sound label and oversaw studio projects for the Nortec Collective.

These days, Goff is getting radio airplay. It’s because he helped produce Noise, the experimental quartet that includes Shepard Fairey, the artist known for his Obey/Andre the Giant guerrilla street art and his 2008 Obama “Hope” posters. Merritt Lear, a singer who has worked with Jason Mraz, handles lead vocals.

KCRW and 91X are playing “Little Lions,” the debut release from Noise.

“I think he became an art icon when he started focusing on communist imagery,” Goff says. “He was still in San Diego then. I first met him when he was working above Hooter’s in the Gaslamp. I told him I would help him and he could pay me in posters. We remained friends.”

Goff said Fairey’s interest in DJ-ing led to him create mash-ups that fold in “a disco bass line with a heavy-metal riff with classic hip-hop lyrics.” The artist turned to Goff to help it come together in the studio. Fairey, who has done artwork for Chuck D, Henry Rollins, and Led Zeppelin, did the artwork for the newly released Noise 12-inch double-disc set that features eight versions of “Little Lions,” overlaid on various tracks by Moby, DJ Z-Trip, and Tim Armstrong.

Goff says there are no plans yet for a Noise tour. “We’re waiting to see what the lay of the land is.”