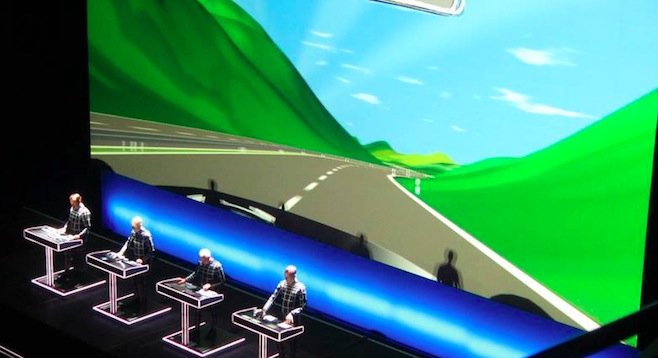 Kraftwerk performs The Man-Machine in 3D

Although it was tempting, I decided that it was not worth the time, hassle, and money to see Kraftwerk play Coachella in 2008, since, frankly, they were the only band in the lineup that I wanted to see.

Four years later, in 2012, I had another opportunity when they announced that they would play eight of their most popular albums from the '70s and '80s in as many days at New York's Museum of Modern Art for a mere $25 a ticket. Unfortunately, the ticketing website overloaded and I, among many others, apparently, was unable to purchase tickets before all eight shows sold out. Unfair, to say the least. The "Kraftwerk Tickets Blues" video parody provided some comic relief at the time, but really, it was a major letdown since I had already planned a vacation to New York to visit friends and family during that time.

When an almost identical series of album-oriented 3D projection shows were announced last November for the Walt Disney Concert Hall in L.A., I was skeptical. I was subjected to the online equivalent of "taking a number" and poised to be reamed by the Ticketmaster fee ogre. But in the end, I got a pair for one of my favorites, The Man-Machine, which was also the first Kraftwerk album that I bought, so I was pretty excited. 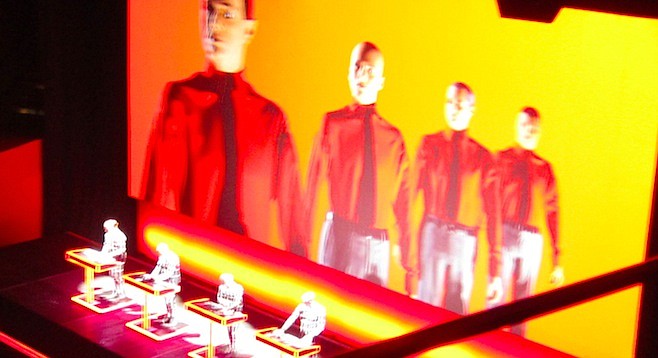 For many years I had imagined a utilitarian stage design lined with carefully choreographed upper-torso robots that had been exhibited in videos. My expectations were not much more than wanting to see these robots perform along with a synchronized video screen and MP3 player while band members watched via Skype and snickered from some undisclosed greenroom bunker while eating catered plates of pork schnitzels and finger-sized bratwurst dipped in Dijon. It was easy to see how and why, with the futuristic concept of removing the musician from the music, Kraftwerk had been the anti-idol influence on the likes of greats like David Bowie, Trans Am, Big Black, Tit Wrench, and even U2 and Janet and Michael Jackson.

Although singer Ralf Hütter has been the last member standing since Florian Schneider left in 2008 (his last live show was in 2006), it didn't bother me since the voice is the most human and irreplaceable (albeit still mimic-able) element. The four-piece came out dressed like cast members of the movie Tron, with glowing white graph lines on black leotards that hugged their mature frames. They played their keyboards and other electronics posted behind LED-outlined podiums. On the way in, I had I counted maybe a couple dozen fanboys wearing the red dress shirt and black ties seen on the cover of The Man-Machine. Some even had LED flashing Lifehacker-ish neckties. A great photo opp if you could get four of them together. A friend of mine commented that the merch table should have sold flattened T-shirts of that red-and-black ensemble, much like the classic and beloved '80s tuxedo tees. A brilliant, subtle, and untapped idea.

Our 3D glasses came sheathed in a flat paper sleeve with a design familiar to the night's highlighted album. They started with the expected setlist of The Man-Machine with really spectacular visuals to coincide. "The Robots" was thrilling, as animated Ken-doll figurines appeared on the big screen and moved their arms and necks gracefully to the music. The screen mimicked the control deck of a spaceship for "Spacelab," orbiting over the big blue marble much like something you would see in a Philip Glass IMAX flight panorama. "Metropolis" was a visually stunning black-and-white city skyline that the camera would cruise through, narrowly dodging buildings. Hit single "The Model" looked just like the music video with archival mid-century models walking the runway. "Neon Lights" and "The Man-Machine" were more abstract with the occasional lyric appearing to re-align our senses.

The Man-Machine being an efficient 36 minutes long, Kraftwerk treated us to a bonus hour of greatest hits from other albums. We heard title tracks from each of the other albums featured during the series. They played them in what seemed to be chronological order, hitting their marks with "Autobahn," "Radioactivity," "Trans-Europe Express," a litany of tracks from Computer World adding "Numbers" (with visuals reminiscent of "The Matrix"), "Computer Love," and "Tour De France" (the version used in the 1984 film Breakin'). They ended with an Electric Café medley of "Boing Boom Tschak/Techno Pop/Musique Non Stop" with 3D notes and treble clef block symbols floating and growing to grand proportions — straight into our 3D glasses! Each member did some short solo noodling before exiting the stage one-at-a-time with a spotlight bow. Hütter was the last to leave. He left us with the departing and perhaps overanalyzed words, "See you tomorrow." Indeed, the concert had ended around the stroke of midnight, and tomorrow had arrived in more ways than one.