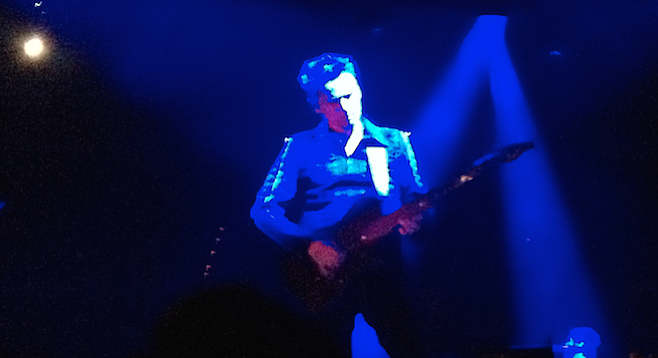 It's the end of the world as Muse knows it...

It was the end of the world inside the Valley View Casino Center, and the audience couldn’t have been happier. The destruction and mayhem was courtesy of British space rockers Muse, who are currently on tour to support their latest album, Drones, a concept record that tells the story of a militaristic future where soldiers are turned into human drones to fight in meaningless and hopeless wars.

...off of this year's concept album, Drones

The setlist seemed to be tailor-fit to the theme as the band pulled the most paranoid and apocalyptic songs from their seven albums and seamlessly weaved them into the plot of Drones. From the somber “Resistance” to the riff-heavy “Reapers” to the hard-hitting “Uprising,” which had the audience jumping and cheering with ecstatic fervor, there was no filler. Every song had a reason for being there.

Of course, it also wouldn’t be a proper Muse concert without the top-notch visuals. This is, after all, a band that doesn’t know what the word “subtle” means, and they proved it by pulling out all the stops. Giant silver screens projected science-fiction imagery, such as exploding planets on “Supermassive Black Hole,” the literal fiery depths of desire on “Undisclosed Desires,” and giant hands that held puppet strings that gave the illusion of attaching themselves to the band members and controlling their every move on “The Handler.” They even put Pink Floyd’s flying pig to shame by having several large, circular light-up drones hovering above the audience during “Drones,” nearly coming within touching distance at times.

Muse have been to the end of the world and back, it’s hard to see how they’ll ever manage to top this. To quote from the night’s most aptly titled and fitting song, “Apocalypse Please,” “Proclaim eternal victory/ come on and change the course of history/ and pull us through /this is the end of the world.” The world ended not with a whimper, but with a deafening, satisfying bang.

I would like to comment on critics who complain of the “over-the-top” Muse productions. When the songs are already the highest quality it only makes sense that the production should be equally fantastic. And fantastic it was. Peak experiences are what create life’s exciting memories. Thank you Matt, Chris and Dominic (and that other great musician in the pit!) for going 110%. David