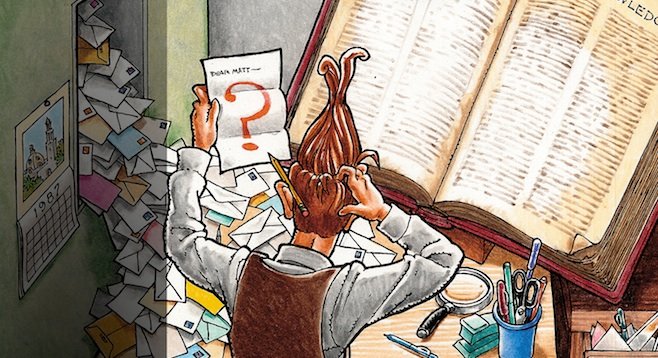 Matthew Alice is between three and seven feet tall and has been known to consume as much as three roast pigs, two kegs of beer, a gallon of cheap plonk, and seventeen cream pies in a single meal; though he could survive equally well on a diet of sunlight, tap water, and Melba Toast. He could bench press a Volkswagon, checkmate Bobby Fischer, or go stroke for stroke with Tiger Woods, but tact and modesty prevent him from doing so. The phrase “tall, dark, and handsome” did not exist before his birth, and has been misused in reference to everyone else since. He does not need a cell phone, because he can hear the world cry out for the knowledge which is his to share. All roads lead, eventually, to Matthew.

Now you can download all the greatest questions and answers from Matthew Alice’s Straight from The Hip column which ran for over 25 years in the San Diego Reader.