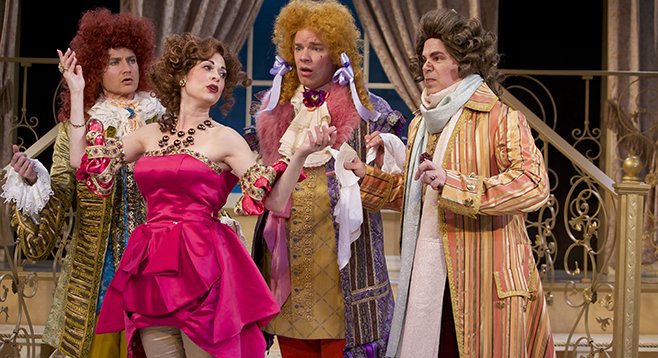 The School for Lies at North Coast Rep

The School for Lies

These days, in order to function, theaters must run on tight schedules — open a show, run four weeks, open another — even though word of mouth takes three to four weeks to take hold. The turnaround makes financial sense, I guess, but if the North Coast Rep can’t find ways to extend the run of David Ives’ master-comedy, and again and again, it will be an artistic injustice.

The School for Lies is a literate crowd-pleaser. It has more layers than a wedding cake, and each abounds with humor. Along with being beautifully spoken, the NCRT production adds dollops of adroit physical comedy as well.

Ives said he didn’t think Molière’s great (and heretofore sacrosanct) comedy, The Misanthrope, was very funny. So he overhauled it: combined rhymed couplets and iambic pentameter with contemporary slang and basement-level vulgarity that might make groundlings blush. The result isn’t a blur of trash and elegance. It’s both, at once.

Somehow it’s 1666, when The Misanthrope premiered, and today. One of Marty Burnett’s best ever sets — and that’s saying a LOT — is pure Louis XIV. Celimene’s drawing room has soft-pink walls (made aureate by Matt Novotny’s lighting), golden trimmings, and, stage right, a Valley of the Kings doorway framed by what could have been Cleopatra’s headdress, were she 58-feet tall. The cast wears Alina Bokovikova’s opulent and, when called for, over-the-top period costumes: roaring reds, blues, and oranges all flecked with gold. Peter Herman’s large, hilarious wigs with myriad curls and colors could moonlight as pup tents. 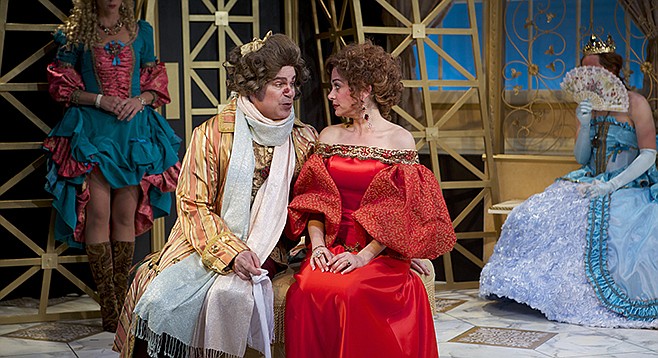 Molière’s play follows the growth of a love from no way to, well, way. Ives pushes the story way past the original ending. Like Penelope waiting for her Odysseus, Celimene mourns the demise of her husband, also lost at sea, as oafish suitors clamor for her riches.

Enter a man in black. He’s Frank, literally, with a species of Tourette syndrome. “I have this kink,” he confesses, “I’ll tell you what I really think.” All thoughts wax misanthropic.

Until he has eyes for Celimene — and she for him, which takes some doing since beneath her rose-colored gowns and red rouge cheeks, she’s almost as misanthropic as Frank. “Society,” she says, “is a school for lies.” Her letters and nasty asides prove her point.

It’s hard to believe that director Andrew Paul made his local debut with School. He has cast the show so perfectly it’s as if knew the territory first hand.

Need a trio of fops who can be funny at will? No prob. Get Phil Johnson (a wart-nosed, faux literati, Oronte), David McBean (poseur extraordinaire, Clitanter), and Jason Heil (dumb as toast Acaste).

Need young romantic/eccentric leads? Joel Ripka (a cross-purposed, and -dressing, Philinte) and Brenda Dodge (naïve Eliante until set aflame). A grumbling valet who can keep a running gag running? Jonathan McMurtry (and what fun to see him on-stage again).

Okay, but what about Arsinoe? C’mon, Celimene’s scheming friend is nineteen kinds of tyrant. She must be monstrous and funny. Sure: Dana Hooley. She excels at both — and her “seeing-eye dog” bit’s unforgettable.

Great. But what about Frank and Celimene? They must speak Molière with David Mamet speed, move like dancers, and sing the highest and lowest notes in the piece.

Easiest of all: cast Richard Baird and Jessica John Gercke and turn them loose. Their superb performances alone demand an extended run. In the meantime, sign them up for Shakespeare’s Antony and Cleopatra, and “let Rome in Tiber melt”!