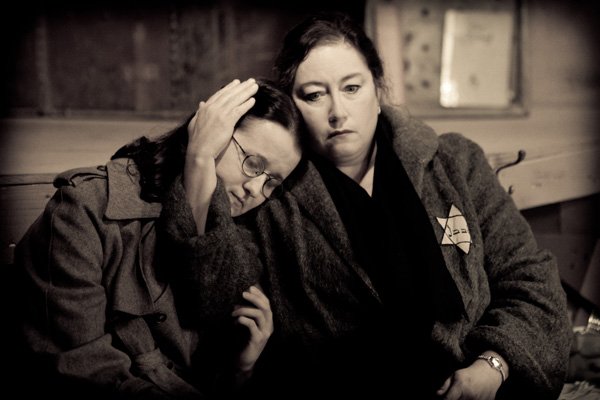 As the others battle with despair, Anne’s vitality — and radiant optimism — can irk most of all.

During OnStage Playhouse’s intermissions, the houselights come up, but the actors remain in character onstage. As audience members talk among themselves or scan text messages, the characters play cards and do small tasks in whispers. They tiptoe around, careful not to make a sound. Their eyes never look beyond the confines of the set. Toward the end of the intermission, they bundle up with thick coats and scarves and prepare for the onslaught of a winter they will feel but never see.

In effect, director Kym Pappas keeps the characters stuck onstage. They simply can’t leave. And this choice mirrors their situation. The actors play the eight Jews hiding in an attic in The Diary of Anne Frank. One false move — a cough, a tipped-over plate — could cost them their lives.

Pappas, in effect, continues the tension during a time-out. She gives the preshow another touch. Almost out of nowhere, Margot Frank, Anne’s older sister, enters and sits, staring at the floor. She wears a bland dress on which a large yellow star holds prominence; it’s the emblem the Germans in World War II used to identify Jews. Rachel Throesch, who gives the role a quiet eloquence throughout, barely moves. Is she the first of the Franks to occupy the attic? Or Margot’s ghost haunting such a haunted place?

In the end, the cast crosses single file in front of the stage, as in a medieval Dance of Death. When they reassemble, many shed tears. This is one of the production’s few false moves. They shouldn’t cry. One of the oldest rules of theater: let viewers feel your suffering, don’t feel it for them. And, anyway, by then the audience is making full use of the complimentary Kleenexes the theater has provided.

Anne was so frank, her father Otto — the family’s sole survivor of the concentration camps — edited her diary for publication. He cut her vehement anger at her mother and the specifics of her growing womanhood.

He gave her the diary, which she called “Kitty,” on her 13th birthday in 1942. A month later, the family hid out on the top two floors, a “Secret Annex” at 263 Prinsengracht, in Amsterdam.

They couldn’t make a sound between 8:00 a.m. and 6:00 p.m., when others were in the building. They blackened the windows — and thus never breathed fresh air — and lived in mortal fear, literally, of noise. Thanks to a Christian woman named Miep (a graceful Anya Tuerk), they had food, of sorts: beans, old potatoes, leeks. It’s almost impossible to imagine the cabin fever they must have felt. They lived this way for two years.

The OnStage production depicts the vice-like claustrophobia beautifully. The stage is cramped and low, eight-inch beams on Chad Oakley and Bruce Wilde’s set intrude from above. In such confinement, dinky personal habits don’t just grate, they torment. As she chases people around and knocks over objects, Anne boasts that being practically entombed will be an “adventure.” As the others battle with despair, Anne’s vitality — and radiant optimism — can irk most of all.

I’ve seen several Anne Franks over the years. But never one the same age — or as good — as Lucia Vecchio. She flits about like quicksilver. She’s delighted with the simplest things, and, in this context, so annoyingly alive that you want to tell her to desist: her shenanigans endanger us all!

That’s the Anne of Act One. By the end of Act Two, Vecchio transforms her into a young woman awakening to her sexuality and to first love. The long arc is there, but the transitions are seamless. Throughout she’s a realist with X-ray eyes that read people astutely.

Sister Margot has the line, as if one were needed: “Because someone’s young, doesn’t mean they have nothing to say.”

The performances overall are a bit uneven, made more so by Vecchio’s standout work. Along with Throesch and Tuerk, Laura Preble (Mrs. Frank), Sven Salumaa (Mr. Frank), Mitchell Pfitzmaier (Peter Van Daan), and Teri Brown (Mrs. Van Daam) provide strong support. In their individual moments Nick Young and Greg McAfee are too one-note as Mr. Dussel and Mr. Van Daan. But they contribute in the tense ensemble scenes where, in the very next second, Nazi boots could come pounding up the stairs.

Instead of A Christmas Carol, which the San Diego Rep produced for decades, Sam Woodhouse told the opening night audience that The Great American Trailer Park Musical is the Rep’s “deeply thought-out holiday gift to San Diego.” He was kidding. Thinking and this musical are a bad fit. But as a holiday alternative, it’s a goofy hoot.

Especially if they bring down the sound. Melinda Gilb, Leigh Scarritt, and Kailey O’Donnell belt the opening number “This Side of the Tracks” with the force of a finale. And every song after that receives showstopper amplitude — for two intermissionless hours. The constant push has a wearing effect. The decibel level also makes the dialogue hard to follow. I suspect one-third to even one-half of the jokes got blurred out.

And this is a funny show with a knockout cast. A three-woman chorus (Gilb, Scarritt, and talented newcomer O’Donnell) give us a tour of Armadillo Acres, a Florida trailer park painted in fading pastels, and its environs. There’s sort of a story, though the plot’s razor thin: an agoraphobic (splendid Courtney Corey) tries to step out of her trailer while her husband’s stepping out on her; a jilted lover vows revenge (David McBean, hilarious as Duke, a skin-headed psychopath); and the complications go from there. Enhanced by Javier Velasco’s choreography and a four-piece band, the performances start and stay over the top. Now, if they brought down the sound, we could gauge just where the top is. ■