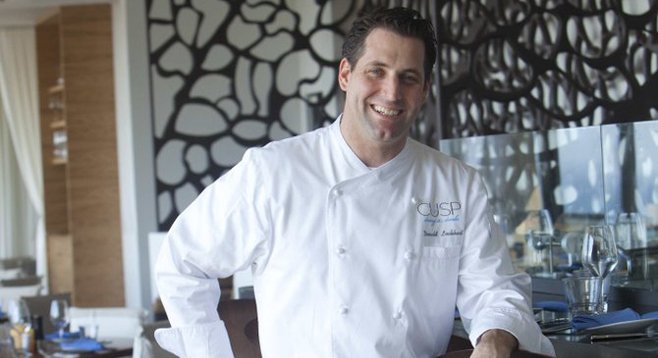 Donald Lockhart gets inspiration for kiddie lit while in kitchen

“I enjoy playing with food ingredients and words,” he says. “In both, the simplest things work best. It’s amazing what you can do with just a few items or a few words.”

Lockhart has written three books so far. None have been published, but he’s been inspired enough to keep trying.

“My aunt’s a ghost writer and she’s inspired me to keep submitting things and refining them,” he says. “I keep trying because it’s a way to be creative and try new things.”

Lockhart’s interest in writing for children is very personal.

“I’ve always been childlike, but I love being tongue-in-cheek” he says. “My books are picture books geared to kids ages 5-8 and they are less than 600 words. Getting the point across simply requires elegance and creativity. It’s important to let the actions in the story speak for themselves.”

Although Lockhart and his wife, Elizabeth, don’t have kids of their own, she teaches kindergarten in Orange County and often shares her stories with him.

“We don’t have our own kids, but she has 25,” he laughs. “We talk about the kids and about motivating them.”

For instance, one story, “There’s An Alligator In My Shoe,” concerns a kid named Stanley who doesn’t want to go to school because he, as might be evident from the title, imagines alligators in his shoes.

“I get story ideas while talking to my wife, but they evolve in my head when I’m working in the kitchen,” he says. “For instance, one of her kids kept bumping his knee against the desk. It would go bump-bump. I changed that to a baby beaver that goes bump-bump in the night.”

Since Lockhart works in La Jolla, it’s fitting that one of his inspirations is the late, longtime-resident Dr. Seuss.

“He is whimsical and wacky,” he says. “Suess invites you to come into the story and he compels you to imagine.”

He admits that he wouldn’t know what he’d do if he became as successful an author, because he also loves being a chef.

“It would be a great problem to have,” he admits.