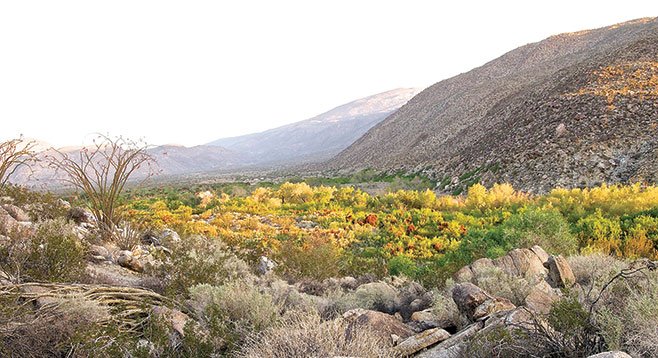 Exploring a rare commodity in Anza-Borrego

Lower Willows is a rare commodity in this desert — an abundance of water and the life it makes possible. Historically, it was the site of a large Cahuilla Indian village. Reliable water and plants important to their diet, including mesquite and agave, made this an attractive home. The village was first described by members of the Anza Expedition in 1774 and, in the following year, Juan Bautista de Anza escorted 200 settlers and 800 head of cattle through Coyote Canyon, marking the start of California’s modern development. Today, Lower Willows is a wilderness resource that continues to support endangered wildlife, including Least Bell’s Vireo and the magnificent desert bighorn sheep.

All-wheel or four-wheel drive vehicles are recommended on the Coyote Canyon dirt road, which becomes increasingly problematic as one drives up-canyon. Water levels at both First Crossing, at mile 3.6, and at Second Crossing, at mile 4.5, will vary seasonally. If concerned about the road, park before Second Crossing and begin the hike from there, which will add 1.6 miles to the trip. 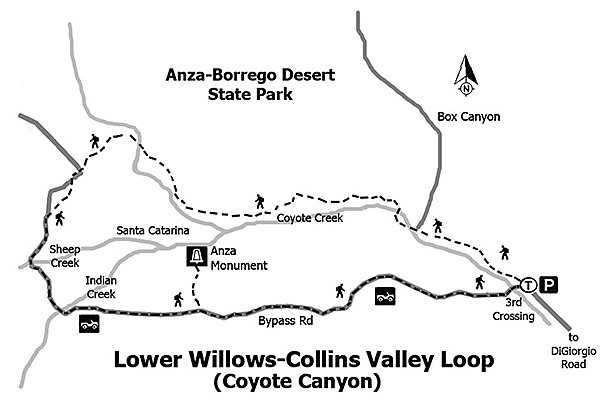 A sign on the northeast side of Third Crossing identifies the start of the Lower Willows Trail, which extends northwest from this point. The former jeep trail was largely obliterated by subsequent rampant growth of cat claw, willows, and mesquite, compounded by a recent flash flood during the summer of 2013. Trying to follow the old trail to Santa Catarina Spring is nearly impossible because of the thick growth and marshy soil.

Instead, follow the equestrian and hiking trail that is marked and signed northwest of Third Crossing. It is sporadically marked with small red flags. Follow the trail carefully as it meanders through this thick riparian area, passing a USGS gauging station survey-marker before entering a flat bench near the creek. Follow the trail until it opens up in Collins Valley, beyond the last palm trees that are visible from Santa Catarina Spring. Look for a signed “Lower Willows Trail” marker to the south that climbs out of the creekbed and leads to the vehicle road in Collins Valley and a junction with a trail leading to Sheep Canyon. Follow the vehicle road southeasterly, which leads back to Third Crossing.

At mile 3.5, take a short side-trip to the Santa Catarina Historical Marker on a knoll overlooking Santa Catarina spring. The marker commemorates the 1774 and 1775 Anza expeditions’ campsites at the spring, visible a quarter-mile to the west in the palm-green riparian area. This was also the site of the execution of four Cahuilla Indians who participated in the 1851 Garra Revolt. The Indian village was burned during the military encounter and never recovered from the aftermath of the revolt.

The last portion of the hike is down the rocky bypass road that was built in 1988 to divert vehicles from driving through Lower Willows. Take care walking down this road and watch for traffic. Cross over the running creek at Third Crossing to your vehicle.