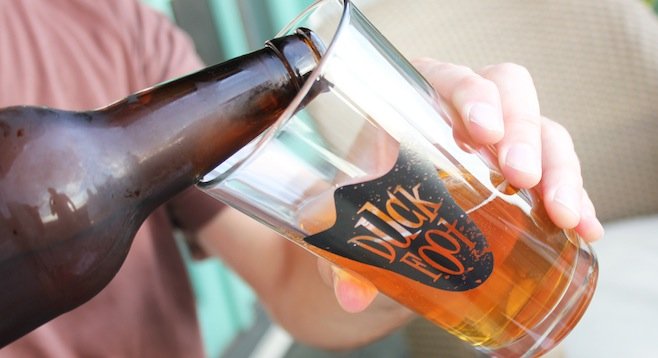 Upcoming brewery leading with flavor while leaving out the gluten

It’s hard to sum up exactly how it feels when a brewer uncaps a bottle of their beer and tells you the first time they tried it, it tasted like armpit. It’s a real anticipation killer, even when said brewer follows up that eyebrow-raising statement by saying that, a month later, it changed completely and is now one of their favorite beers. Such was my introduction to the brews of upcoming company, Duck Foot Brewing. 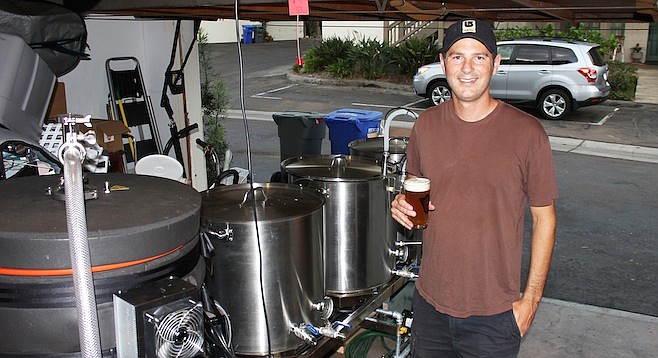 Self-proclaimed "Head Quack" Matt DelVecchio had me out to his garage-turned-brewery to try an assortment of the prototype brews he and consultant James Petti (of Karl Strauss Heavy Petti Double IPA fame) are working on as DelVecchio negotiates for a space in Carlsbad to house his business. The first of the bunch was that armpit beer, a low-alcohol ale brewed with Arizona desert blossom honey. Though a bit nervous, I took a sip and instantly understood why it was such a hit with its creator. The beer was quite good—slightly sweet, delightfully earthy, and very quaffable.

What followed was one of the most pleasant surprises I’ve had tasting brand new beer in some time. DelVecchio served me a half-dozen ales, all of which came in between four and seven percent alcohol-by-volume—he intends to debut by year’s end with around seven core beers, all of which will be sessionable, plus monthly high gravity and otherwise outlandish brews. There was a simple yet charming blonde ale, a mild black ale similar to a schwarzbier in its low roast and easygoing nature, and a hybrid of a brown and pale ale that was one of the most delicious fusion beers I’ve come across in some time. The latter is something I could see myself ordering three of in succession, a rarity for someone who rarely returns to the same beer in a single seating.

As I was mulling over the brown pale ale, a familiar individual dropped by, Troy Smith, the brewmaster at Vista’s Belching Beaver Brewery. Turns out, he lives in the same complex as DelVecchio and is familiar with his beers. He advised me that I was lucky to get to try Duck Foot’s oatmeal stout before taking his leave. After trying that deep, chocolaty, creamy brew, I indeed felt lucky to get in on the ground floor of what DelVecchio’s brewing up. Put that beer in a six-pack and it has the potential to be the cornerstone upon which Duck Foot rises. It was that good.

Oh, and by the way, all of DelVecchio’s beers are gluten-free. I bring that up after mentioning the beer for two reasons. One, the brews were of such quality, I’d rather lead with that. Two, DelVecchio is trying to brew beers that will stand up to anything already in San Diego. He’s not on a crusade to craft gluten-free beer, but since he is gluten intolerant, his beers have to be gluten-free. It’s more necessity than a marketing ploy or attempt to fill some niche.

DelVecchio learned of his condition a year-and-a-half ago while he was attempting to establish a brewery in his original home of Westchester County, New York. During that process, he began to experience gradually worsening stomach pains. Then, earlier this year, he visited San Diego for three days, toured Stone Brewing Co., saw the beach, and instantly decided that he and his wife needed to move here. On his way back to New York, he came down with the worst gastrointestinal incident of his life. That episode led him to a doctor and a gluten-free diet, which effectively fixed the problem.

The only thing he couldn’t stomach was gluten-free beer. He found it so subpar that he swore off beer altogether, opting for wine and tequila. But he missed the suds and lamented the lack of decent options. Rather than bellyache, his wife told him to show some tenacity and create something better. As he vowed to do on his wedding day, the homebrewer of several years honored and obeyed, and the result is some beer that, if the recipes hold up when ramped up to the 15-barrel system DelVecchio hopes to someday operate, will be a welcomed addition to the San Diego brewing scene.