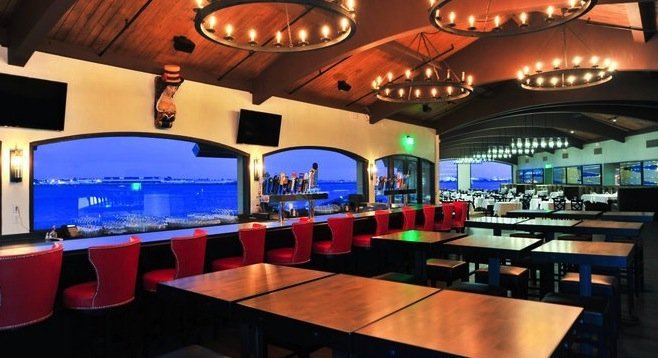 Boasting views of the San Diego Bay, the downtown skyline, and Coronado Island, Tom Ham’s is the only restaurant in the country with a fully functioning U.S. Coast Guard lighthouse.

“My father, Tom Ham, built Tom Ham’s Lighthouse in 1971,” said co-owner Susie Baumann. “This was his dream, to build a restaurant that highlighted the history of San Diego. I think he would be pleased with the outcome of this remodel. The genius of our architect Graham Downes was that he could see what an older building could be.”

The Baumann family worked closely with Downes and his team to ensure that every interior finish was updated to complement the classic early California design of the building, the press release reads.

An outdoor dining deck was added to the second floor and features infinity glass, providing unobstructed views of the San Diego Bay and the city skyline.

As guests enter Tom Ham’s Lighthouse, they will see a unique keg room, which sets the tone of the restaurant, the release continues.

A bayside wedding site was added and artist Christopher Puzio created the wedding arch with 2,000 individual aluminum rings, a new icon on the bay.

The new design also moved the upstairs bar to face the bay.

“I know my father would be proud that his three grandsons Grant, Tommy and Andy, who were instrumental in keeping his love of this City alive in the décor you will see inside – the maps on the grand stairway, the U.S. Coast Guard 1893 Fog Bell shined up and proudly placed in the lobby, Tom Ham’s valuable antique model ships, and his collection of shipheads are strategically mounted in the upstairs bar,” added Susie.

Susie, her husband Larry, and sons Grant, Tommy and Andy own and manage Tom Ham’s Lighthouse and the Bali Hai Restaurant.

For dinner, choose from Pomegranate-glazed Pork Belly with Fontina polenta and Roast Corn and Shrimp Soup as starters; Lobster Bouillabaisse and Paella as main dishes and Butter Poached Pearl Potatoes with Herbs and Grilled Asparagus with preserved lemon as side dishes, among many other selections.

Tom Ham’s Lighthouse will also continue its famous Sunday brunch, with plenty of seafood, such as lobster claws and crab legs, an omelet station, pasta station, and prime rib.

The new upstairs bar highlights 32 beers on tap, including “Beacon No. 9” brewed by Ballast Point in honor of Tom Ham’s Lighthouse Beacon No. 9, a working Coast Guard lighthouse.

The majority of the beers will be from established local breweries, such as Karl Strauss, Ballast Point, Stone Brewery, Green Flash, Port Brewing, the Lost Abbey and Manzanita.

An extensive wine list features selections by the bottle and glass.

What a great view! I hope to visit soon--have enjoyed the restaurant several times.

We can only hope that they turn that tourist trap operation into a real restaurant. From get-go it was a joke. That the same people have owned (and presumably operated) it for forty-plus years and now have the nerve to tell the public that it will be an honest attraction astounds. Over the years the cuisine coming out of the kitchen was par with your average Denny's. And somehow it managed to be popular. How? THE VIEW. With that vantage of the harbor, North Island, Point Loma and the harbor entrance, they didn't need a real kitchen, or any chef who knew how to cook. And the fare they served for tourist prices was truly humble. What they "served" was a magnificent view that was especially good in the evening. And so the owners knew that putting a real gourmet spot there was a waste of money, effort, etc. Just serve them some chow, lots of alcohol, and some mediocre entertainment, and the operation would be a rousing success. How many million tourists have fond memories of the Light House over those forty years? Plenty, I'd say. And who am I to say it was a bad deal? Just don't ask me to remember a couple visits there with fondness.

While walking on Harbor Island one afternoon a couple of months ago, when the restaurant had just reopened, a group of us stopped in to see it. We noticed the upstairs balcony/patio from the exterior. It reminded us of the great view from C Level, just a little farther away. I had never liked the old building, had only been there once, and wasn't expecting a big change. Fact is, it's quite nicely done, particularly the second floor, but also the party/reception room on the main floor. Those "rooms" unadorned are usually pretty boring, but it had nice proportions. Turns out we decided to eat there. I know no one will believe me - if you read the comment above - but it was exceptional. Obviously, completely new menu. I had a steak and everything about the meal was perfect & delicious. It was not cheap, but it was worth it. I thought to myself, 'They better get the word out, because no one will believe how delicious the food is now." So, give it a try if you want to find a new place to eat, outside, with a great Harbor Island view of downtown.

If that old leopard is really changing its spots, that would be great. I never expected any restaurant in San Diego with a view to be less than expensive, thus I'm never taken aback. But that operation was just lacking any of the basics that would justify its popularity. Give it a few more months, and then give it a try. They could easily slip back into old habits, start cutting corners, and let the food prep revert to something like IHOP.