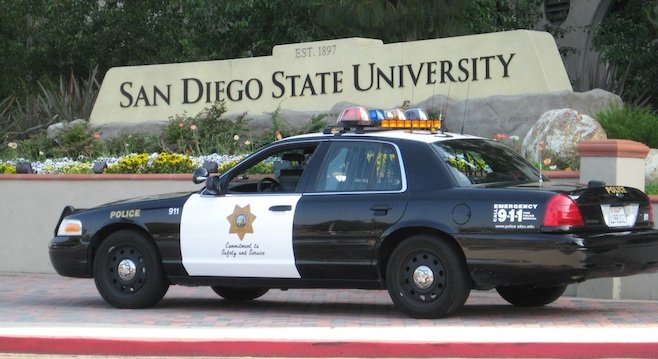 SDSU to be audited for sexual assaults

A report by the Huffington Post says that San Diego State University has joined a list of California state-funded universities set to undergo an audit of sexual assault reporting and follow-up policies.

According to the item, "The state auditor's office did not explain why Chico and San Diego State were chosen, but both universities have reputations as party schools."

In August, a bipartisan group of lawmakers passed a request for an audit of how sexual violence is handled at Berkeley, one other UC campus and two Cal State campuses.

Officials confirmed this week that Berkeley, UCLA, Chico State and San Diego State were selected for the state review, expected to be released in April 2014.

The audit request, drafted by Assemblyman Anthony Rendon (D-Lakewood), came after Berkeley was hit with a federal complaint in May. The complaint accused the school of violating the Clery Act, a campus safety law, in its response to reports of sexual assaults.

San Diego State's most recently posted crime summary, covering the period from the beginning of this year through August, reports 1 rape and 26 assaults on the campus, but there have been complaints from throughout the two California university systems that administrators are not providing accurate crime numbers.

The California auditor will review how well these universities are complying with federal and state laws in their response to sexual harassment and misconduct, examining cases from 2009 through 2013.

The auditor's office will determine, of the sexual violence allegations made by students, "how many formal investigations were conducted in comparison with issues addressed through an informal resolution process."

According to the scope of objectives posted by the auditor's office, the investigation will include consideration of "whether students are encouraged to file complaints of alleged sexual harassment or sexual violence and are adequately informed regarding their ability to file such a complaint."

The audit will also seek to find out whether the schools are using "appropriate methods to investigate the complaint, including whether those methods are consistent with law and best practices. "

In addition, the audit will examine whether the universities have gotten "complaints from victims of sexual harassment or violence regarding the process for reporting, investigating, and resolving a complaint, and, if so, how such complaints have been resolved."

Last year San Diego State was seventh on a list of "the 25 Most Dangerous Colleges in America" by Business Insider.

I'm recalling the publicity of last year when UCLA was described as he most dangerous college in America. There was hell to pay about that one. I'd always wondered exactly how that conclusion was reached. UCLA is in a very affluent and generally sedate part of LA, whereas USC is in an area that is about as different as you can imagine. Yet, USC wasn't named as particularly dangerous. The "party school" speculation by the unnamed person in the state auditor's office was a laugh. Within the UC, Santa Barbara is known as the party campus, always has been, and likely always will be. But it wasn't selected. Go figure.