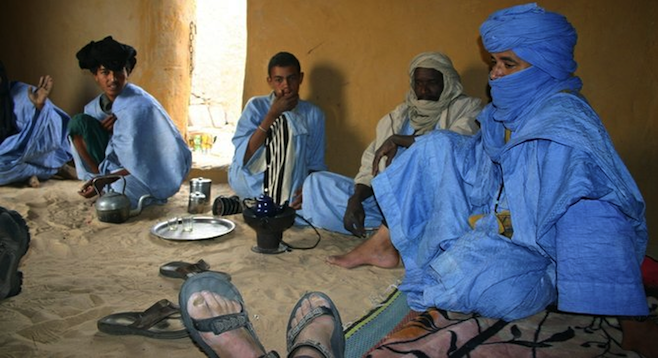 In my capacity as a travel writer, I journeyed through much of Mali's Sahara Desert with the fabled Blue Men in the years before it was desecrated by Al-Qaida.

For two thousand years, Tuareg nomads have operated the trans-Saharan camel caravan routes that hauled gold and salt from North Africa to western ports such as Mopti and Dakar.

Tuaregs are Berber people and get their name not from the blue robes they are known for, but the ink they use to dye them. It comes from sea urchins, and prolonged wearing of such garments permanently stains the skin blue. (It's an interesting sidenote that the Turaegs are very superstitious and believe that evil spirits can enter a man’s body through the nose or mouth. The men cover their faces, while the women do not.) 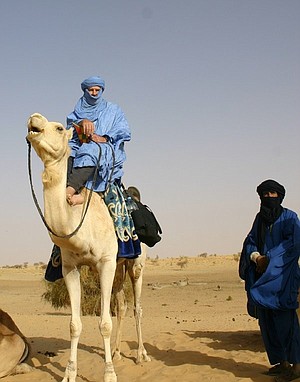 I was graciously invited to ride not only with them, but as one of them, fully outfitted in blue robes and astride a camel for two weeks, leaving from a remote former Foreign Legion outpost at Arawan, deep in the Sahara, and making a wide southerly circle through the empty quarter, ending in Timbuktu: a journey of over 100 miles.

These friendly people treated me as one of their own. Whenever we arrived at a new nomad camp, I was instantly served tea and given an audience with the village head man. Their world was so insular they showed little curiosity about where I came from or why I was there. I was simply a pilgrim, and the law of the desert demanded hospitality be shared with all travelers.

Evenings followed a familiar pattern. The women would serve a meal of seared goat over rice and then retire while the men gathered in a circle to swap stories (top). Even though they spoke in their native Tamasheq and my guide translated for me, after a couple nights I recognized enough words to realize some of these stories were traditional, usually tales of past battles or personal bravery that were told over and over. 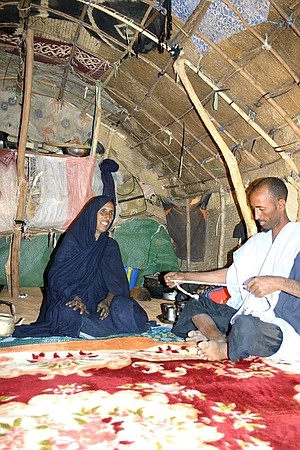 Head man and his wife.

I was never allowed to talk directly to any of the women, who demurely averted their eyes whenever I was around, but at one village I was invited to watch them construct a yurt for a wedding ceremony.

That afternoon, before the evening’s nuptials that I was also invited to attend, I was having tea with the village elder and was startled when his wife entered and spoke directly to me through my local guide. This caught me totally off guard as it was against their customs and I never expected to converse directly with one of the women. As we sipped our tea she began to ask very personal questions – was I married? ( I am.) Did I have children? (I do not.)

I was thinking it a great honor to have this elegant lady speaking directly to me, but was wondering why, when suddenly a young girl entered the yurt and sat behind the man and his wife. In her white robes I could not determine her age but took her for a teenager. She did not speak and kept her gaze lowered. 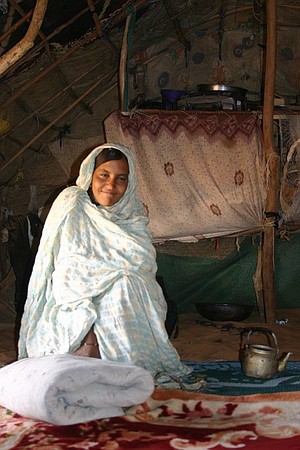 Finally, after much questioning, the lady said, “She will make you a fine wife” – and with that I saw the young girl smiling directly at me! I had been ambushed!

Fighting a wave of panic, I turned to my guide, who seized the moment and while thanking them profusely for the great honor, politely informed my hosts that my tribal customs did not permit multiple wives as theirs did.

While deftly pouring me another cup of tea, the lady said it was too bad, as her daughter would have made me very happy, and with that she got up, motioned for her daughter to follow, and left, while her husband just sat there sipping his drink as though nothing had happened. For them, a wedding was just business, and I would probably have been quickly added to the evening's nuptials had I been willing to fork over the cost of a few goats for my new wife’s dowry. 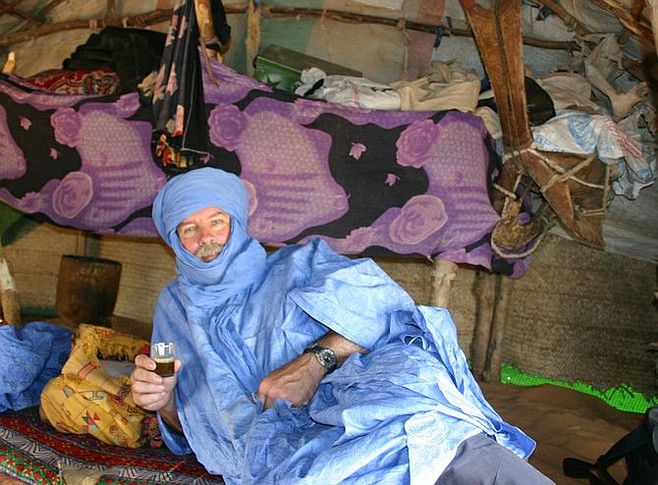 Having tea in a yurt.

That evening, while still very unnerved by the day’s events, I attended the wedding. The young girl was not there but I did notice several other young women openly smiling at me and giggling when they caught my eye.

The next morning, at my insistence, my guide and I left very early, and all day long he kept punching me on the arm and laughing, saying, “It’s not too late!” 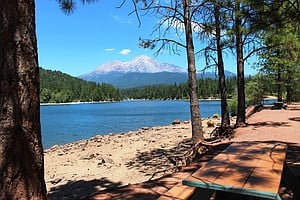