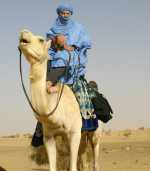 James Michael Dorsey is an explorer, author, and photographer who has traveled to 44 countries. Most of his journeys are far off the beaten path, to record indigenous cultures.

His first book is Tears, Fear and Adventure, and his second book, Dancing with Dinosaurs is scheduled for a 2013 release. He is a contributor to the the Los Angeles Times, Christian Science Monitor, Perceptive Travel, and Wavelength magazine. He has had features in BBC Wildlife, Natural History, Wend, Sea Kayaker, Ocean, and International Living magazines. His work has appeared in the TravelersTales book series, in addition to Wild Moments, the Seattle Times, Orlando Sentinel, and L.A. Weekly newspapers. He is a five-time SOLAS category award winner for “Best Travel Writing.” Published in Canada, England, Japan, China, Dubai, Uganda, Nigeria, and Ethiopia.

He is a regular contributor to the inflight magazines of Air Uganda, Air Nigeria, and Seychelles Airlines. His photos have been used by the National Wildlife Federation, Ocean Conservancy, International Cetacean Society, California Gray Whale Coalition, and the International Whaling Commission. His photos were twice chosen as Kodak Internationals “Photo of the Day.” He has appeared on National Public Radio’s “Weekend America" and is a Fellow of the Explorers Club and former director of the Adventurers Club.

The Mitchell Caverns are not as large as those at Carlsbad, New Mexico, or as well known — but are local, every bit as dramatic, and come complete with a history made for movies. I ...

At night, especially under a full moon, the locals say you can hear the voices of the ancient ones. They ride the wind, telling the story of their people as they glide across the rocks. ...

Officially known as the Antelope Valley Poppy Preserve, the rolling hills of the southern Mojave, 15 miles west of Lancaster, explode with color each spring as 1,745 acres of wildflowers end their hibernation and burst ...

In 1963 the smash-hit movie The Birds, directed by Alfred Hitchcock, terrified film audiences and was the talk of the town for months after its opening. The story of a small California town under siege ...

On my third run I am getting the hang of things, taking cues from the pig next to me to see how far he leans into the turns while ducking in time to avoid the ...

Nyein Sanda works in an office not much larger than a closet in the central train station in Yangon, Myanmar. His ticket booth on platform 7 hosts a constant stream of tourists looking to ride ...

When the first rays of sunrise strike the great mosque at Djenné, many believers fall to their knees from its beauty. Djenné, Mali, is a fly speck on a map. Overlooked by most travelers, it's ...

Stepping off the bullet train into a cold Hiroshima morning, we could sense the past. My wife Irene and I became immersed in its history by chance. A journey through New Mexico took us to ...

Cemeteries have always fascinated me, and I have visited them all over the world. On a recent trip to Saint Petersburg, Russia, I visited the Alexander Nevsky Monastery. Founded in 1710, it contains some of ...