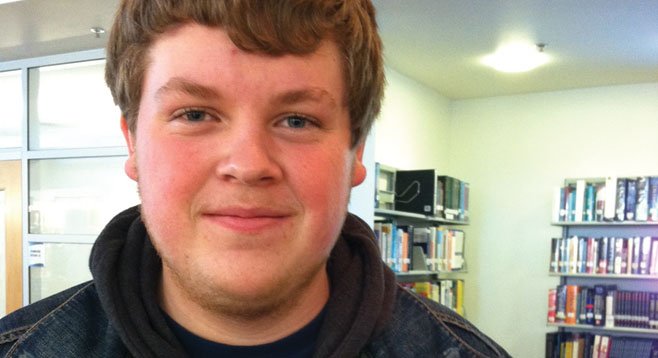 The pull of J.R.R. Tolkien

“I’ve been poring over military history books — those big coffee-table reference books you see in the bargain section of Barnes & Noble. I have a huge one on tanks, one on military uniforms, one on planes. I’m really into that.”

“It’s just facts. I like facts. If I’m looking for fiction, I like stuff like The Lord of the Rings, by J.R.R. Tolkien, though I haven’t read that series in a while. I’ve been reading A Song of Fire and Ice, by George R.R. Martin. It’s kind of like Lord of the Rings in that it’s got a sort of medieval setting with sword-fighting, but it’s more modern. Well, not modern, but… It’s a multipart series. It just keeps going on. It’s about kingdoms vying for power.”

“There are so many characters, and you can’t get too attached to any of them. I remember the first book follows the leader of one of the northern cities — Ned Stark. He’s forced to fight because the whole kingdom is dissolving. But (spoiler!) he actually dies at the end of the book.”

“If I want to talk about books I’ve read for school, probably the best book I’ve read this year is Bless Me, Ultima, by Rudolfo Anaya. It’s set in post–World War II New Mexico, and it’s about a boy growing up in that era. It’s got a lot of spiritual stuff. He’s trying to find his path in life, and the book is dealing with the conflict between traditional spiritualism — nature and animal spirits — and the Catholic Church’s point of view.”

What about graphic novels?

“My favorite that I’ve read recently was Scott Pilgrim vs. the World, by Bryan Lee O’Malley. It’s about this 20-something loser — well, not a loser, but sort of a guy who doesn’t have the best life. It’s about him trying to win a girl, but it’s also a commentary on this generation. It probably encompasses this generation better than any comic I’ve ever seen.”

Do you have a favorite author?

“It would have to be J.R.R. Tolkien. Just the way he pulls me into his books. The worlds he creates are so different from reality, and yet they’re so believable.”

Tell me one scene that has stayed with you.

“It would have to be the siege of Minas Tirith, the main city.”

What book has been most life-changing for you?

“I feel like there’s something, but I can’t remember it.”

“I read the LA Times every morning. I start with the comics and then look at the headlines for anything that grabs my attention. I read National Geographic, and the Smithsonian has a magazine about air and space that I read.

Do you talk to your friends about reading?

“I have a good reading circle at school. We do it on our own, but it’s usually about the books we’re reading for class. If it’s the right type of book, the discussion will probably turn to theology. I don’t know why. A lot of times it’ll be about what a certain symbol means or why an author uses a certain kind of imagery.”