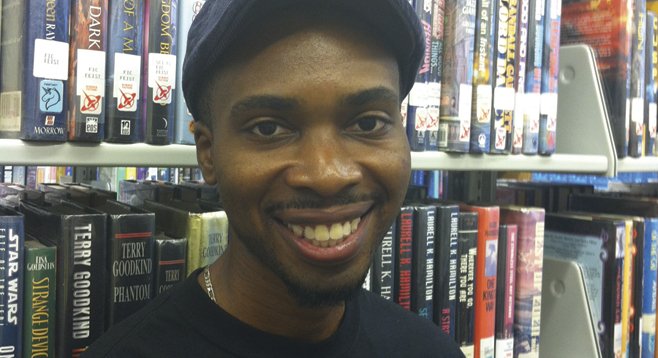 Desmond Smith on Grisham's King of Torts and numerology

“Two books, actually. I’m finishing up The King of Torts, by John Grisham, and I’m reading a book on numerology.”

Tell me about the Grisham.

“It’s about a lawyer. He’s, like, a little public defender, but he gets pulled in by this big corporation to basically cover up something they messed up. They’re paying him a lot of money, and he keeps going for the money. They keep throwing him bigger and bigger cases, and he gets caught up in it, and the government comes after him.”

“His ex-girlfriend. She keeps telling him to watch out, but he isn’t listening. She dumps him right before he gets really rich and famous, but even after he gets rich, she doesn’t want to go back to him, which is pretty cool.”

Tell me about Grisham’s style.

“It’s pretty simple. My sister is 16, and she can read his books. It flows pretty easily. But it’s very detailed. He does a lot of good research. And I actually think most of his books are based on true stories. I found that there actually was a guy called ‘the King of Torts.’”

What about the numerology book?

“My girlfriend and I are just getting into numerology and astrology and the whole kind of — I don’t know what you would call it. Not spiritual, but I guess, ‘higher learning but not religious’ type of movement. I’d been studying astrology, and they often talk about numerology. I want to get into it. I’m not really good at numbers and math and things like that, so I thought I should probably try to find a book on it.”

How are the numbers significant?

“It’s kind of like astrology in that it does give a broad plan of where you should look. But we still have free will. It’s kind of weird.”

“Walter Myers. I’ve been reading him since I was a child. He writes teen books, but he’s also entered into adult writing. He’s known for his crime books — criminal lawyers.”

What book has been most life-changing for you?

“The Alchemist, by Paulo Coelho, which is about a shepherd who goes on a trip. From the moment it starts, it’s kind of fairy tale-ish, a good take-you-away-type story. I do work and school, and it’s good to have a story that can take you away. But, also, it definitely does inspire you to follow your dreams, no matter what. You may get off track, but there are always things that are going to pull you back to what you really need to do. You just need to pay attention and focus on what your dreams are. It’s about following through on your dream to the end.”

Do you talk to people about reading?

“I go by word-of-mouth. If someone tells me about a good book, I’ll look it up. Or I’ll do my own research online. Or I’ll just walk through the bookstore aisles and see what attracts me. I’ll talk to my girlfriend about what I’m reading, and that can get pretty heated. She likes reference books, nonfiction. I like fiction.”

“I read Entrepreneur and Psychology Today.”

How many articles do you read to the end?

“All of them. When it comes in the mail, I sit down and read it in, like, two days.”