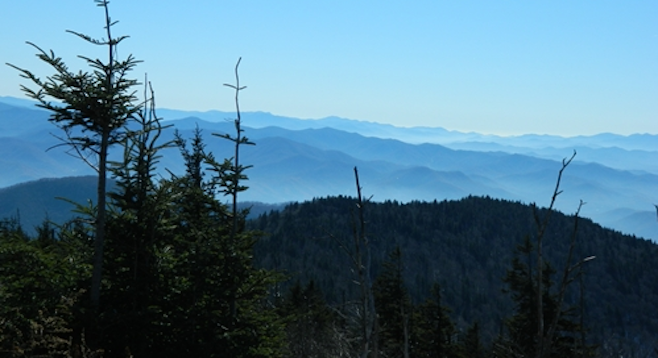 Lots of tourist amenities have sprung up around Great Smoky Mountains National Park, the most visited national park in the U.S., and it’s no wonder. The stunning scenery and wildlife have attracted people to the area for centuries.

These days, “the remnants of Southern Appalachian culture,” as the National Park Service calls it, are also a lure. With the seemingly unending, unpopulated mountains, you can visualize how some Cherokee were able to avoid the forced march on the Trail of Tears.

The Smokies offer lots of ways to have a rollicking good time. What’s surprising is the area's hidden, elegant and peaceful side. 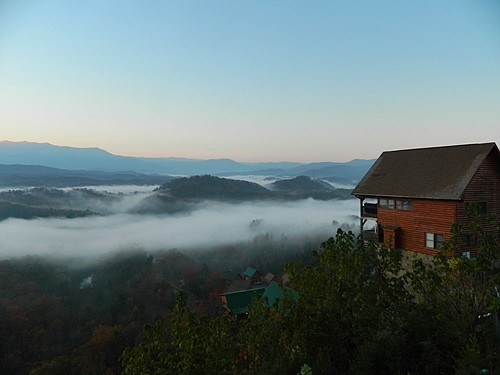 Where to stay. Whether you’re a sizeable group or one of the A-listers performing at Dollywood, you’ll want to stay in one of the Dollywood Cabins (left). Each has a breathtaking mountain view where, in the morning, you’ll see why they call it “the Smokies.” The scientific explanation is the mountains’ rainforest – moisture evaporating from the vegetation creates smoke in the sky.

Some of the cabins have several bedrooms and baths, fireplaces, game rooms, decks and hot tubs; one even has an indoor heated pool.

What to do. Though the Great Smoky Mountains National Park is the most popular of our national parks, attendance is reputedly off because so many kids want to be couch potatoes. They have no idea what they’re missing! 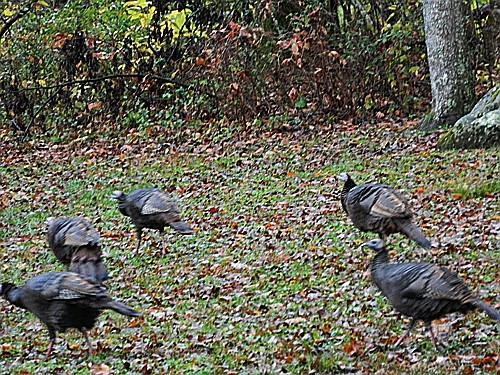 Wild turkeys in the Smokies (the real thing, not the bourbon).

The park covers over 800 miles, straddling the states of Tennessee and North Carolina. Seventy-one miles of the Appalachian Trail run through the park, where you can do remote backcountry hiking and camping. The park has four stables and 10 campgrounds. They offer a “not-so-junior” ranger program, where those of us 13 and up can take naturist classes.

On the very edge of Gatlinburg, “and the bright lights have faded to blue,” as the Eagles sang, is the Arrowmont School of Arts and Crafts. One hundred years ago, Arrowmont was founded by a benevolent sorority intent on bringing literacy and employability to the settlement now known as Gatlinburg. The sorority found commercial markets for artisans, including basket makers and woodworkers. These days, it’s open to the public; you can take classes in many different arts and crafts.

What makes Arrowmont unique is that for a weekend class or longer, students live on 14 acres on the border of the national park. Beginners learn next to experts refreshing their skills; you might be sitting next to a famous artist with a PhD in textiles, for instance. Spend time in cabins living the artist’s lifestyle, eating communally. 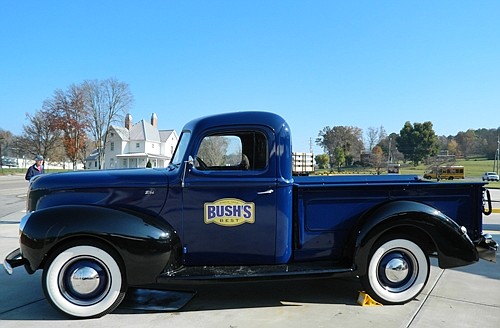 Taking the tour at Bush's.

Sure, it comes out of a can, but America’s favorite baked beans – Bush’s – has a very cool visitor’s center in Chestnut, TN. It's absolutely free. I learned an interesting fact: 98% of people want the chopped bacon they put in the bottom of the cans, but 96% of people throw it out! At the gift shop, they sell some of their products with vintage labels. Their café, open six days a week, serves up modestly priced home-cooked specials. BBQ comes from the local fave, Holy Smokes BBQ – a champion in the field. A classic dessert they serve is the Pecan Pinto Bean Pie. It's less sweet than regular pecan pie and has more protein (albeit with the same amounts of sugar and butter).

Whether you head to OberGatlinburg for skiing, tubing or just for the ride up the mountain, it’s definitely different. The scenic 15-minute tram ride takes you to the summit of Mt. Harrison, passing many otherwise hidden vacation mansions en route. It’s open year-round; besides winter sports, there are restaurants, shops and other amusements.

Maybe you've started to see Ole Smoky Tennessee Moonshine in well-stocked liquor stores. Moonshine has been made in the area for 200 years, but legally only since 2009. (Running illegal moonshine in the area was how NASCAR got its start, by the way.) Sample all of their flavors for free at their Gatlinburg distillery. Occasionally, they have live bluegrass bands performing.

One of the best-known, familiar brands in the area is Dollywood, Dolly Parton’s theme park. She really has made an effort – with things like keeping the surrounding forest intact, preserving a historic church, and setting up artisan craft demos – to make the park feel culturally relevant and non-commercial. There are lots of musical shows, including an old-school Country Gospel show.

Where to eat. Trout, trout and more trout! Smoky Mountain Trout House has a local fisherman provide fresh local trout daily. You can order it a dozen ways, including Trout Eisenhower, pan-fried “the old timey way,” using their own cornmeal breading and bacon flavorings. It’s served with bacon and butter sauce, along with sautéed mushrooms and onions.

Blount County, Tennessee, calls itself “The Peaceful Side of the Smokies.” There, you’ll find several upscale resorts, including Dancing Bear Lodge and Restaurant. With triple-high ceilings, fireplaces, mounted and stuffed game, and natural materials like stone and wood, the place definitely says "elegant lodge". Their cuisine is Southern favorites with a locally sourced gourmet twist, such as a daily variation on red beans and rice.