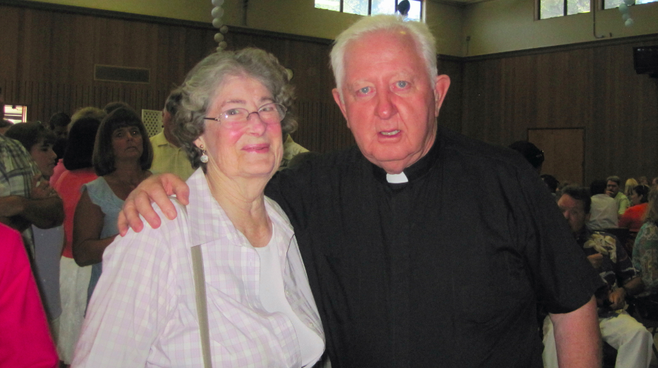 Hundreds show for services June 22 and 23

Traditionally, the priest blesses the people near the end of Mass. Before that happened, the congregation stood and surprised Gallagher by singing "Irish Blessing," Father Bob Fabing's version of the prayer with lyrics that include: "May the road rise up to meet you. May the wind be always with you. May the sunshine warm you always 'til we meet again.…” The song was followed by several minutes of applause.

"If I knew I was going to get this big of a crowd, I would retire more often," quipped the priest, who was raised on a dairy farm in Tipperary, Ireland. 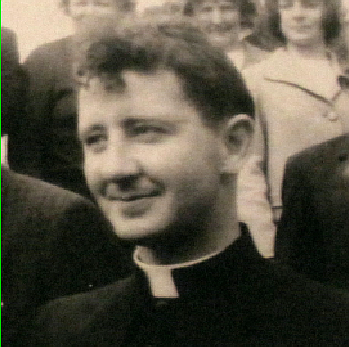 Michael Gallagher (image from the Parishioner)

Tom Dean, a San Carlos resident and former editor of the quarterly Parishioner newsletter, gave a presentation on June 22. He contributed to the summer 2013 issue, which was a 16-page tribute to the pastor, who was born in 1942 and ordained a priest in 1966.

Editor Kathy Wilson and her staff compiled photographs, reminiscences, and a timeline of Gallagher's life and the parish where the first Mass was celebrated in an airplane hangar in 1954.

According to the Parishioner, during his years at Our Lady of Grace, Gallagher "celebrated at least 1340 baptisms, 453 marriage ceremonies, and 856 funerals."

Madelyn Fenick and Pat Hough said they appreciated Gallagher's humor. "I love his sermons; they're so meaningful [and delivered in] a Shakespearean voice. He always puts in a joke," said Fenick. Hough said that Gallagher is "always upbeat" and "open to people."

The receptions were held in Moloney Center, named for Monsignor Thomas Moloney, the pastor who died in 1986. In the center, a sign outside the kitchen (remodeled in 2012) proclaims "Gallagher's Kitchen."

Hough said Gallagher shared recipes during bread-making sessions that started at 5 a.m. Although she didn't attend, Hough praised the results. Gallagher retires on June 30, and the parish is holding a bread sale that day.

Gallagher will live in La Mesa and wrote in the newsletter, "I am retiring as pastor, but not as a priest…. I would hope that I can help out in parishes if I am needed and invited." His successor is Peter McGuine, pastor of Santa Sophia Church in Spring Valley.