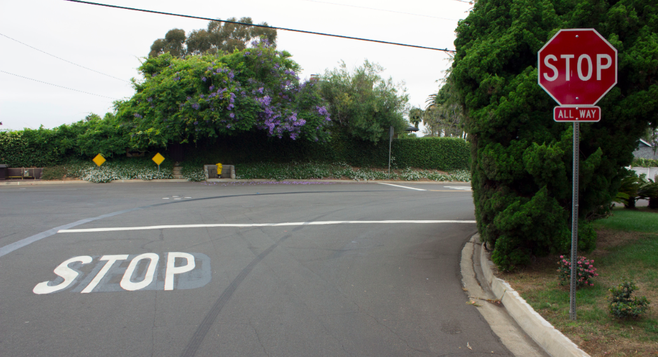 The Peninsula Community Planning Board (PCPB) last month voted to remove three stop signs in the Wooded Area of Point Loma, but after allegations that the board violated the the state's open-meetings law (the Brown Act) by improperly noticing the matter on the agenda, the issue had to be addressed again. The matter will be discussed at the board's next regular meeting, on June 20 at 6:30 p.m. at the Point Loma/Hervey Branch Library, 3701 Voltaire Street.

It's the latest twist in a saga that began last year when someone — who to this day remains anonymous — somehow swapped out the yield signs and replaced them with stop signs along a block of Jennings Street between Albion Street and Silvergate Avenue, a stretch that in the past provoked concerns about hazardous curves and dangerous speeds.

Legality of the tactic aside, some residents applauded the change because they said it improved safety; others didn't, and the issue has divided the neighborhood all year.

Ordinarily, decisions about what signs go where are determined by engineering formulas and empirical data. But city policy allows citizens to ask for deviations — in this case, a stop sign instead of a yield sign — through their local community planning board. If the board approves, it goes to the city-council member of jurisdiction, who makes the formal request to the mayor in the form of a memo.

Typically, such requests are honored, said Gary Pence, city senior traffic engineer. That's what happened last January when, at the request of a citizen who had gathered petitions, the PCPB voted to support the conversion of the yield signs and allow city engineers to update the surrounding signage to accommodate the change, according to minutes of the meeting.

“Updating” turned out to mean installing another stop sign; where there were once two yield signs and two stop signs now were five stop signs. Since then, the dispute between two opposing groups — both claiming popular support and both with pages of petition signatures — has kicked into high gear.

Last month's vote to keep the renegade stop signs but remove the other three was intended as a compromise, according to Pete Nystrom, who heads the Board's Traffic and Transportation Committee. Nystrom had previously warned the groups to come up with a compromise plan on their own and to allow the PCPB to place the necessary stamp of approval on the request.

“We're not engineers, we're just volunteers who serve on this board,” he told them the month before. But in a meeting the day before the May 16 vote that included traffic engineer Pence, an aide to councilman Kevin Faulconer, and a member of the group favoring the conversion of the yield signs, Nystrom said he was told Faulconer wanted the PCPB to put the issue to rest once and for all.

After the vote, a resident, Don Sevrens, charged the decision violated the Brown Act because the matter appeared on the agenda under old/new business instead of as an action item. His attorney wrote a letter to the city attorney's office, who referred the matter to Tony Kempton, associate planner for the city's Development Services Department.

In an email to involved parties, Kempton said that no violation had taken place, but the matter should be re-voted “in an abundance of caution.” But an email to Sevrens from deputy city attorney Keely M. Halsey took on a different tone: “Community planning groups must act in compliance with the state’s open meetings law, the Brown Act. Our advice was provided with that in mind.”

I go to PLNU and I hear theyd put these stop signs up to stop speeders from the Navy base. Theres a story in the Becaon all about this by that same guy Tony. http://sdnews.com/view/full_story/22434535/article-Peninsula-stop-sign-issue-to-come-to-head-for-planners-?