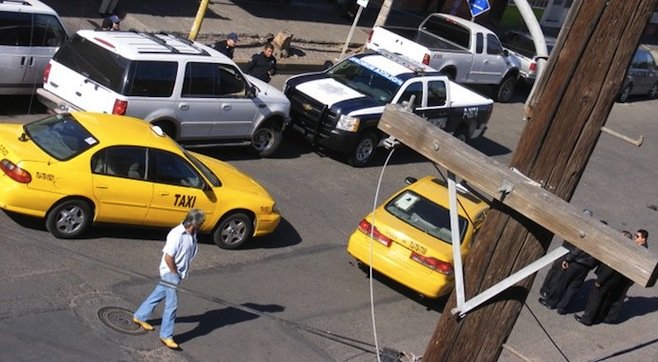 Friday the 13th didn’t work out so well for a certain taxi and its driver in the sketchy Zona Norte section of downtown Tijuana.

Clientele of the local taco cart, wayward pedestrians, sidewalk prostitutes, and assorted mopes had their late morning interrupted by the sound of screeching tires at approximately 11:15 a.m. at the northwest corner of Avenida Constitución and Calle Coahuila, when a white SUV spun out in the intersection and then T-boned one of three parked yellow taxis northbound on Avenida Constitución.

The driver of the SUV, accompanied by a passenger, waited a few seconds before putting the vehicle in reverse and then there were more screeching tires as the SUV fled north on Avenida Constitución.

The drivers of the two undamaged yellow cabs pursued the hit-and-run driver, but the chase didn’t last long. As the SUV approached Calle Baja California a block north of Calle Coahuila, an approaching police pickup truck happened to be traveling eastbound on Baja California, which halted the SUV long enough for the pursuing taxis to box in the SUV.

Police took note of the situation once they reached the intersection and fronted the SUV, which effectively stopped the vehicle in the street. Police then took the male driver and male passenger into temporary custody on the sidewalk.

If the driver and/or owner of the SUV had been unable to provide proof of insurance or enough cash in order to cover the damage to the taxi (including medical expenses when applicable), then the driver and/or owner would have been taken to jail until provisions of payment could be procured. The offending vehicle would have been impounded and used as part of the payment, if necessary.

No clear reason why the driver of the SUV was not charged with fleeing the scene of the accident.