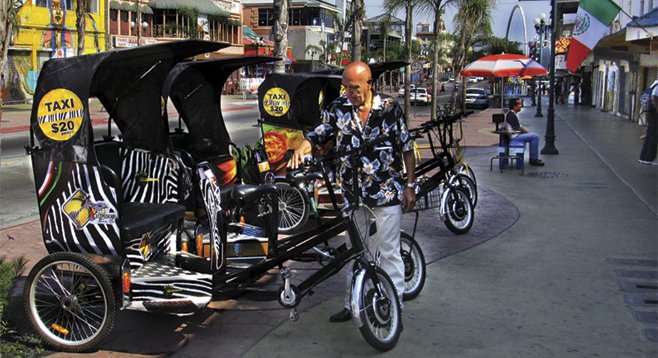 Get a Manly Pedi in TJ

It’s hot in Tijuana this afternoon, and Juan’s face is flushed and beaded with sweat after pedaling up and down Avenida Revolución for the past half hour under the implacable Mexican sun. Juan is a pedaling propellant of the latest mode of public transportation to hit the city — a pedicabista — and he powers an Ecopedicab around downtown Tijuana.


Story author takes a ride in a Tijuana pedicab.

The pedicabs are a space-age variant of the traditional Chinese rickshaw, those people-powered transportation devices oft seen in Asia cities, whereby a two-wheeled cart is pulled along by a running man. The “pedi” part comes in at the front end, which is essentially a bicycle connected to a cart, a mechanical centaur, of sorts, half man, half mechanical horse. The craft is constructed of lightweight metals and features a battery-powered “assist” motor that amplifies the force and power of the pedicabista’s pedaling, should the need arise.

Pedicab transportation systems have burgeoned all over North America’s cities in recent years. New York, Chicago, Boston, Portland, and Seattle have outfits dedicated to the business. San Diegans have been familiar with them in the Gaslamp Quarter for more than a decade, and the trend has migrated southward, most recently into San Ysidro, where pedicabs pick up passengers along the route that runs from the San Ysidro trolley terminal to the Las Americas Premium Outlets shopping center, located along the U.S. side of the border. 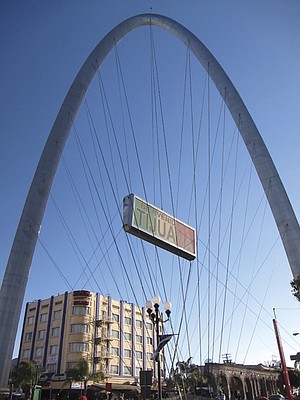 Hector, another pedicabista, senses my intrigue with the cabs lined up at their base camp, a custom leather goods shop on the corner of 7th and Revolución, and he playfully rings a bell mounted on the handlebars. Nattily attired in a floral-print Hawaiian shirt and jeans, Hector gives the lowdown on the Ecopedicab operation and its introduction into the environs of downtown TJ. The loquacious and bilingual Hector tells me, in English, that the cabs run a route along Avenida Revolución, downtown Tijuana’s main street, from the Grand Arch, adjacent to the Nelson Hotel and Plaza Santa Cecilia, where the mariachi never ends (and where I learned that a whiskey shot glass stuffed into a trumpet’s bell functions quite effectively as a mute), all the way up to 9th Street, where one of the more upscale “gentlemen’s clubs” is located. Along the way, you’ll pass the newly resurgent 6th Street, whose myriad watering holes cater to the twentysomething crowd; Sanborns Mexican department store and restaurant; Hotel Caesar’s, home of the original Caesar salad; Las Pulgas’ cavernous live concert and boxing venue; the Jai Alai Palace and Caliente Sports Book, erected in the 1940s; Tijuana Tilly’s restaurant; and other eating and drinking emporiums located along TJ’s main drag.

Hector lifts the passenger seat and points out the electrical accoutrements that equip the modern pedicab — the battery-powered assist motor, turn signals, horn, and hydraulic braking system. Considering all of this, it is hard to believe that the pedicabs are purchased for around 1000 bucks, from China.

In the afternoon, after indulging at some of the bars and bistros along 6th Street, I opt to take a pedicab back to Plaza Santa Cecilia. About eight of the cabs cluster on the corner. I can see Hector doggedly making his way up Rev after dropping off a fare. Hector is my pedicabista and is now geared up in official pedicab livery — khaki shorts, a bright yellow T-shirt emblazoned with the TJ “Zonkey” Ecopedicab logo, and matching baseball cap. I’m seated, quite comfortably, in the cab unit as Hector pulls out from the curb on 7th Street and makes his way alongside the auto traffic backed up on Revolución. Hector had previously informed me that pedicabs have a good relationship with TJ cops, and sure enough, when we arrive at a blocked-off section of Revolución, the presiding traffic officer waves us through while autos are obligated to detour. Keeping up an easy banter as he casually pedals along, Hector offers tidbits about the passing mise-en-scène and the city itself, pointing out buildings of historic import and regaling me with local lore.

I note the smoothness of the ride — no jostling or bouncing about. Hector explains that the pedicabs have coil-spring suspension struts that ensure a bumpless flight. We reach the Grand Arch, the end of the line. The mariachis are out and about, mingling among the sweltering throng of turistas moving up and down Plaza Santa Cecilia. All told, my trip from pedicab headquarters took about seven minutes, which is twice as fast as I usually do it on foot during my daily trek to a favorite coffeehouse on 7th, and we easily beat the auto traffic that frequently clogs Revolución during weekends. Of course, the open-air, street-level sightseeing tour and genial commentary offered by Hector enhanced my perceptions of Tijuana.

The price of the trip is 20 pesos, or around $1.75; a similar pedicab ride in San Ysidro costs $2.50. During the workweek, the TJ pedicabs have been operating at a 10-peso rate. They’re available on Saturday night up to 3:00 a.m. and other days until midnight. ■

A very sweet piece of writing about the city we both love and enjoy. Thank you.