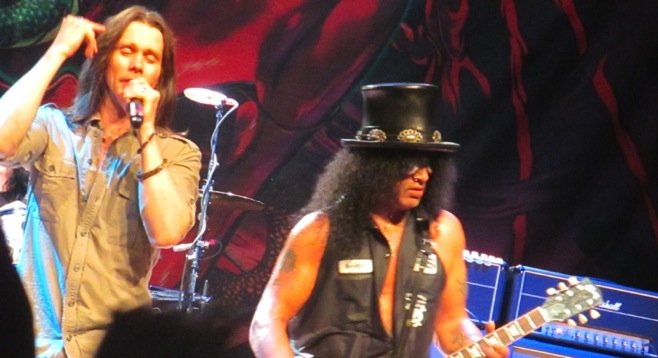 Slash slithered into town with Myles Kennedy and the Conspirators and slayed a sold-out House of Blues with a high-octane, ear-splitting performance. It was evident from the first two songs, "Halo" and "Night Train," that lead singer Myles Kennedy is not just a fill-in, nor is he a rose thorn in the side of Slash. His wide range of vocals and scratchy snarls proved to be the perfect accompaniment to the iconic rock guitarist.

Slash donned his trademark top hat and Gibson guitar and ripped through a nearly two-hour set filled with songs by Guns N’ Roses, Velvet Revolver, his 2010 self-titled album, and the newest release, Apocalyptic Love. It's as though he set out to prove that beyond the iconic look and name, there's still a hard-rocking guitar player who can still play with the best of them.

Fronted by Kennedy, Slash and the rest of the band supercharged the audience with songs such as "Mr. Brownstone," "Sweet Child O' Mine," "Starlight," and the theme from The Godfather before closing the show with a rollicking, extended jam of "Paradise City."