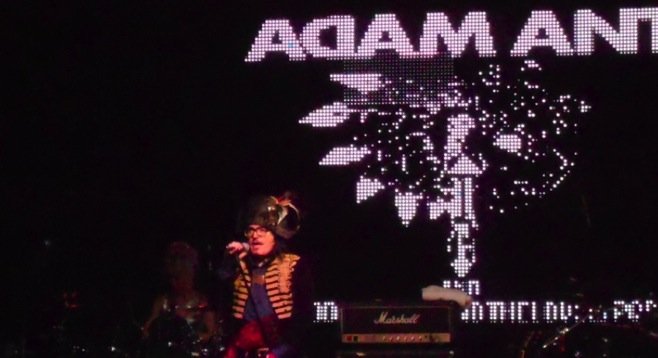 Eighties pop star Adam Ant finally made it to town after his rescheduled February date. Brothers of Brazil played an energetic opening set of Bossa Nova rock and then “Ant music” hit the stage with two drum sets. Sauntering out after his band played an intro, Adam Ant received a delirious welcome, launching into "Plastic Surgery." "King of the Wild Frontier," Ant told the audience, was a song that he "always looks forward to singing." The crowd sang along, too — all night long.

"Wonderful," a love song, was the recipient of some sneering during the singing of certain lyrics about smiles, and then the romance was killed dead by the mention of Fifty Shades of Grey and the next song: "Whip in my Valise."

Adam Ant has had his problems with bipolar disease, depression, and being locked up by England's Mental Health Act, but now he's on the road through October promoting his new album, Adam Ant Is the Blueblack Hussar in Marrying the Gunner’s Daughter. Through the hit-filled 28-song set, the now 58-year-old bad boy spoke sparingly, choosing instead to rock the house. Closing the show with "Physical (You're So),” a nearly sold-out house showed Adam adoring Ant love.