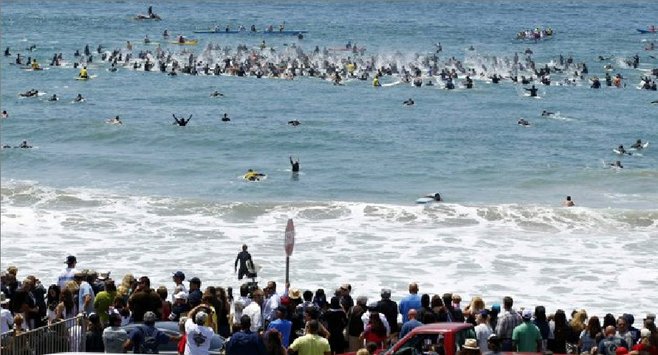 Over 250 surfers joined the memorial paddle-out to honor Junior Seau on Sunday, May 6. The Oceanside beach, in front of the former San Diego Charger linebacker’s home, was packed with two to three thousand people.

Jessica and Bob from Oceanside joined the paddle-out because Bob had surfed with Junior and worked out with him at their gym. Michael from San Marcos sported his Chargers lightning bolt surfboard and wore Junior's #55 jersey over his wetsuit. 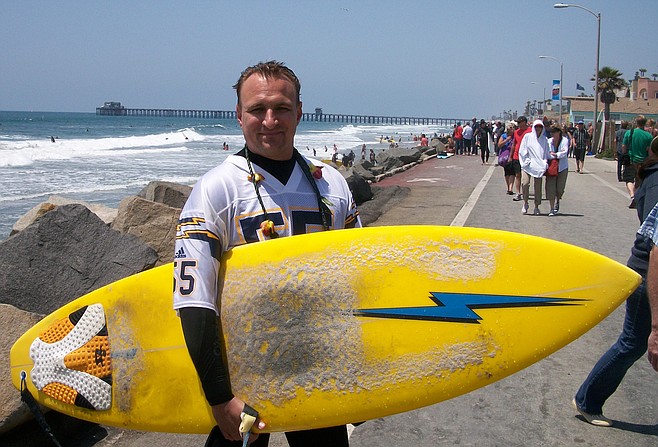 John wanted to do something special on his 50th birthday, so he drove up from Chula Vista. Ronny from Maui moved to Oceanside two years ago. He said he met Junior on several occasions and had been making plans to go Sea-Doo'ing with him. Two teenaged women from San Diego, Judy and Kaitlyn, joined in because they said Junior represented all of San Diego well.

After the surfers paddled out and joined together in the traditional circle, one of Junior's best friends, Jay Michaels, paddled out to the center of the circle on Junior's paddleboard and addressed the crowd. By 1:00 p.m. the ceremony concluded with many surfers staying in the water and Oceanside lifeguards patrolling past the breakers on jet skis.

Oceanside police on the scene said they had no idea how much longer the section of the Strand, between Wisconsin Avenue and Seagaze Drive (where Junior’s house sits across from the beach), will be closed to through-traffic. Three officers said they'd had no problems with the public since the makeshift memorial was established after the announcement of Junior's death last Wednesday morning, May 2.

Great photo Justin! It really adds to the story.