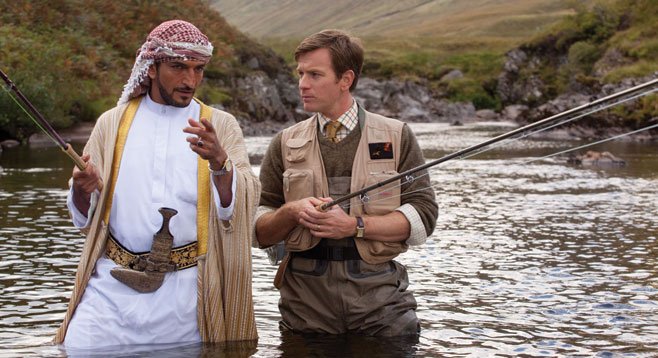 Salmon Fishing in the Yemen, Norwegian Wood, Being Flynn, Jiro Dreams of Sushi

Salmon and sushi this week, also poor sex and De Niro on the skids: 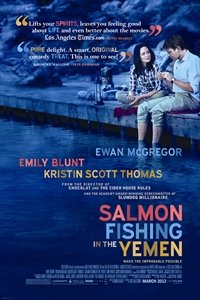 Salmon Fishing in the Yemen ***

Sheikh Muhammed of Salmon Fishing in the Yemen must have seen Lawrence of Arabia and then never forgot the Bedouin chief Auda abu Tayi (Anthony Quinn) bellowing, “I am a river to my people!” Egyptian actor Amr Waked is no Quinn, but he brings similar intensity to Muhammed, determined to provide his Yemeni people a dam, a new river, and even fish (salmon!) for the river.

This Quixotic fantasy was first hatched in Paul Torday’s novel. Perhaps only a director (Lasse Hallström) who made My Life As a Dog and What’s Eating Gilbert Grape would make a film with this story and title. It is about the vision thing, and buying into it once the sheikh hires them are two searching souls: crisp, sweet English business consultant Harriet (Emily Blunt) and a henpecked, nicely dweeby scientist, Alfred (Ewan McGregor). Typical humor is when the camera, watching Alfred feud with his wife, settles down to the wet viewpoint from his beloved koi pond (like his life thus far, a closed and confining circle).

Kristin Scott Thomas is the British prime minister’s PR bulldog. She thinks Britain can boost its Middle Eastern profile by providing live salmon from Scotland, where the sheikh first fell in love with fishing. Scott Thomas could match her flint with Meryl Streep’s Iron Lady, though her snarkiness is rather rote. In England and Scotland, the film reaches for the quirky satirical vibes of the old Ealing studio comedies, which were big on absurd dreams and projects. In the rugged desert nation — Yemen, south of Saudi Arabia, is mostly known for sand and fanatics — the sheikh’s vision takes on the aura of a mirage made awesomely of cement.

McGregor and Blunt are shy, subtle, and a touch fey, as if wishing they could grow gills and swim upstream. Fine though the stars are, it is the conviction of Amr Waked’s sheikh that keeps this whimsy reaching, with true charm, for its vision thing. That the hot bottom of the Arabian peninsula needs a big fish that swims up cold rivers to spawn is crazy, but the salmon streaks would surely have pleased Lawrence and Auda abu Tayi. 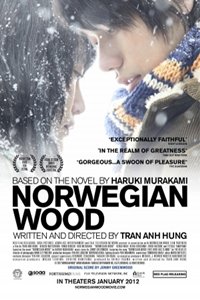 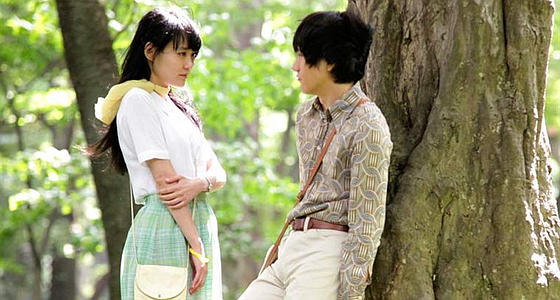 Early brilliance can cast a shadow. Trần Anh Hùng’s The Scent of Green Papaya (1993), an exquisite Vietnamese reverie shot entirely on French studio sets, was a revelation of exquisite mise-en scène (sorry, but sometimes a critic just has to use that term). The purity of its design made us feel privileged. Later, with Cyclo and Vertical Ray of the Sun, Trần maintained his grip of style but seemed narratively scattered. I have not seen his Hong Kong serial killer movie I Come with the Rain — whoever imagined him working with Josh Hartnett?

For Norwegian Wood, Trần adapted Haruki Murakami’s novel. The cinematographer, Mark Lee Ping Bing, has also filmed superbly for Wong Kar-wai and Hou Hsiao-hsien. But our suspicion soon grows: that a therapy clinic outside Kyoto was chosen largely for the lush trees and photogenic fields, that Tokyo apartments were designed to serve the flowing camera moves, that student demonstrations are 1967 period markers choreographed to wrap like origami around the main character.

This is all meant to feel very internal and tuned in depth by the music of Radiohead’s Jonny Greenwood and, of course, the title Beatles song. But the movie never lets us in. It is stuck with lovely surfaces and Watanabe’s remote, boring passivity. This is like a coffee-table book of a private diary that we can’t understand. Ingmar Bergman never reduced his stylized heartbreakers to the soap of, “Nothing can heal the loss of a beloved...whatever we learn will be of no help.” 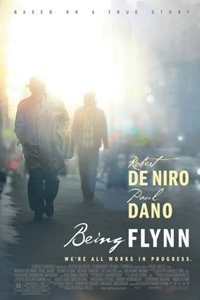 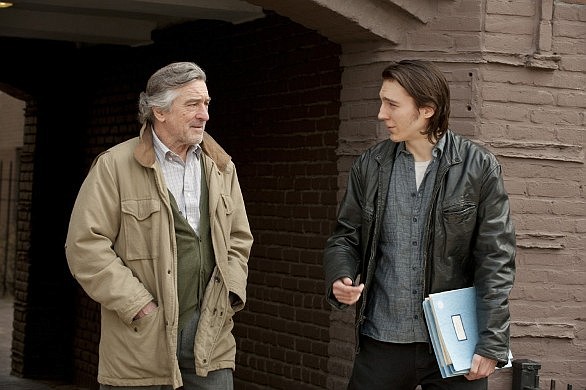 Paul Dano has the purest moon-boy gaze since the ’70s era of Bud Cort (Brewster McCloud, Harold and Maude). When Dano stares at Robert De Niro in Being Flynn, his eyes say: This jerk is my dad. Although Nick (Dano) hasn’t seen father Jonathan Flynn (De Niro) in 18 years, numerous clues have told him what we soon see: the senior Flynn is a vodka drunk, homophobe, racist, and self-deluded fool. His unfinished novel is — so he avows, protests, screams! — an opus of Mark Twain quality.

All relies on De Niro’s performance. Is Bob, at 68, relighting his Scorsesean furnace by driving (for a while) a New York cab like Travis Bickle in Taxi Driver? He contorts his face into Bickle scowls and spits crazy invective (to a nice black woman: “You ape”). Or is his Jonathan only a more vulgar and grizzled Jack Byrnes from the Fockers series? Director Paul Weitz also did Little Fockers. De Niro has spent so many years chewing ham as cinema’s Mr. Grump that most viewers under 50 cannot recall his stunning youth. One hopes he remembers. At some point, even for great actors, the juices coagulate.

Weitz adapted poet Nick Flynn’s memoir Another Bullshit Day in Suck City (a title that shouts “Read this or I will kill you!”). Maybe that explains the fleeting presence of Flynn’s wife Lili Taylor, an excellent actor sadly wasted. But it never justifies the film’s literary loops and tricky time skips, the ironic parallels of father and son (Nick also aspires to literature), the anthropological slumming at a Manhattan charity hostel for homeless men, an upscaled version of the Oso Negro flophouse in Treasure of the Sierra Madre.

Nor do those bookish roots nurture Julianne Moore’s effort as Nick’s mom, whose drift from exhaustion into futility is barely graffiti. Honestly touching is pretty Olivia Thirlby, as a charity worker disgusted by Nick’s phase with cocaine. Finely photographed by Declan Quinn, the film seems to draw from gutter bard Charles Bukowski and Joe Gould’s Secret and George Orwell’s Down and Out in Paris and London. This may be the most un-Republican movie of 2012, since it makes a case for the urban welfare net as necessary. 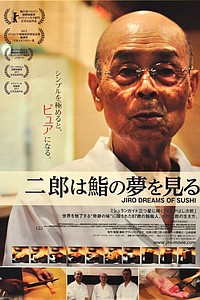 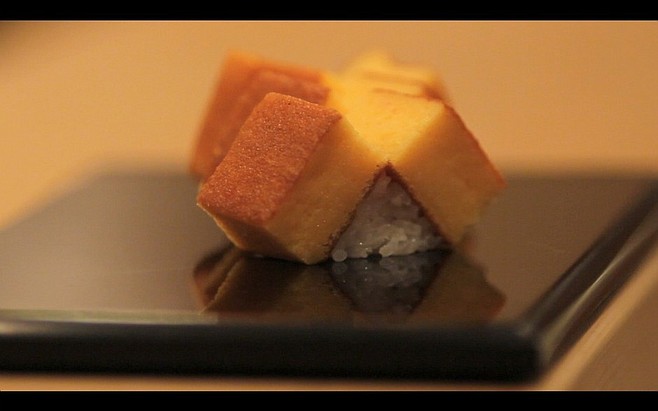 What is perfection? A horizon that beckons and never arrives. Artists, not wishing their search to end, are grateful. After 75 years in the trade, Tokyo sushi-genius Jiro Ono, 85, remains gloriously unsatisfied. In Jiro Dreams of Sushi, he still faces the customers (no more than ten, at up to $300 each). He slices and folds and pats and arranges the morsels of paradise, with rice like a heavenly cloud. Folks, these are not fish sticks.

David Gelb’s documentary watches the ritual process, from the market selection of the finest tuna, shrimp, etc., to the Zen-fine cutting, cooking, and saucing. Apprenticeship can take a decade (one precious task is to massage the octopi for half an hour). As a side dish, we learn that Jiro was a tough kid whose alcoholic dad left early, that he kicked smoking, and that son Takashi waits patiently to take over the little basement temple of tasties.

Went to see Flynn. Good Lord, I think DeNiro is done. A vulgar and grizzled Jack Byrnes is exactly what I saw. He cannot put a character over the top like he used to. I truly think DeNiro never could act; he just occupied characters, and those that were close to who he was in real life, came off as stunning and unforgettable. But as soon as a director other than Scorsese asked him to perform--to actually act, it immediately went downhill. He is stiff and moves like a cardboard man. What a shame; what a loss. Seems he is not willing to take chances anymore. Maybe he feels he doesn't have to. Probably because he knows he's Deniro.

One other thing, David; took a look at the photo from Salmon Fishing...How do you suppose they catch salmon without reels on their fishing poles?

Javajoe25. I don't think De Niro is an extroverted man, so almost all the roles where he has to break the shell wide open have a kind of strain (which can work, but sometimes doesn't). His over-the-top stuff in Cape Fear was fairly ludicrous, and his attempts at playing an amateur showman in The King of Comedy are only amusing (and creepy) because of all the nervous insecurity he is venting. His Jake La Motta in Raging Bull has a fist for a head (and a knuckle for a brain). But in his best work he has had moments of greatness. His use of Brando-Corleone touches in Godfather II is probably the best thing he ever did. I was surprised to discover that you can fly-cast for fish without a rod or reel. Look it up online. I would not suggest going for marlin that way.