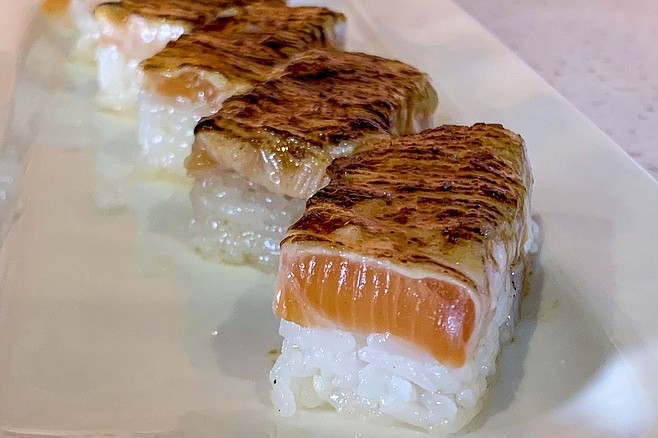 The place is familiar, and it turns out I’ve been here before, when it was a low key spot serving hot sandwiches, salads, and bar food. But it looks different now, with cherry blossoms painted on the walls, and many varieties of sushi on the menu. Chef Jun Sushi & Kappo opened a few months ago, and has made the casual Bay Ho property its own.

There are higher end sushi options, including fatty tuna ($42) and uni sashimi ($35), revealing the chef’s interest in highlighting quality ingredients. But the vibe here suggests a more easy-going sushi eater, the type of place friends might gather to drink beer and sake, while sharing baked fish collar and sushi rolls after a day playing at the beach or bay. 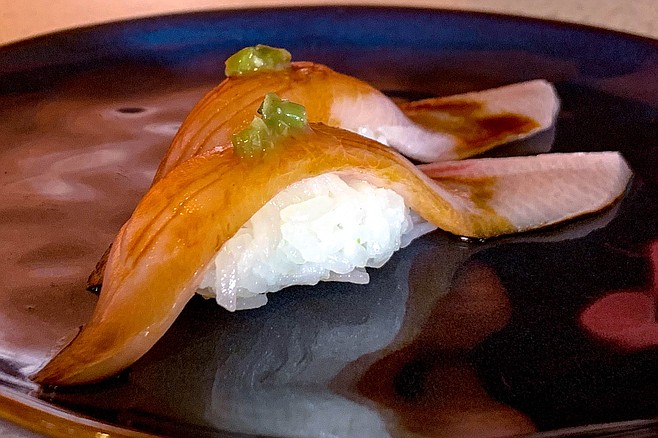 No reason it can’t be both, I guess. It serves ramen and teriyaki, too. I suppose if I lived up that hill off Morena Boulevard, I’d want it to be a little more everyman than the city’s highest rated sushi destination, Sushi Ota, sitting on its pedestal just a mile away.

Priced per pair, I still find myself indulging in the yellowtail belly nigiri ($7.50 compared to $17 for the fatty tuna). It’s brushed with house made soy sauce and topped with wasabi root, and confirms this could be a place to bliss out on delectable fish next time I have a full wallet. Omakase goes for $75 here, heading up a few intriguing combos including seven pieces of chef’s choice nigiri for $21. 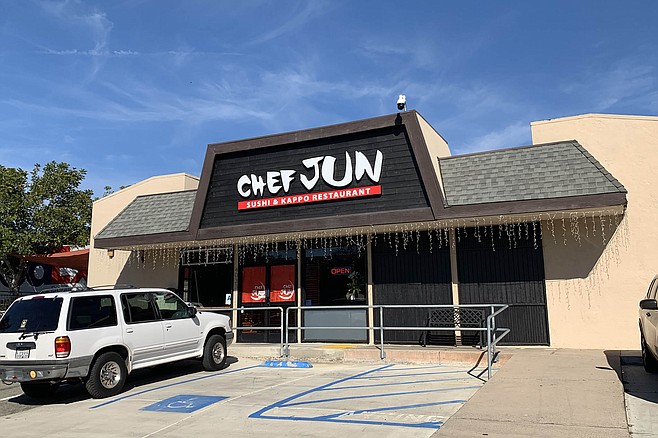 But I’ve really come looking for an interesting little tidbit on the menu I spotted online: oshi sushi.

This forerunner of nigiri sushi presses rice and fish together into a brick shape, historically cured or cooked fish. Sliced into smaller bricks, it looks like a selection of nirgiri that have been compressed into boxes. Chef Jun’s offers six pieces each of salmon ($12), shrimp ($13), or lobster ($16.50) oshi sushi. 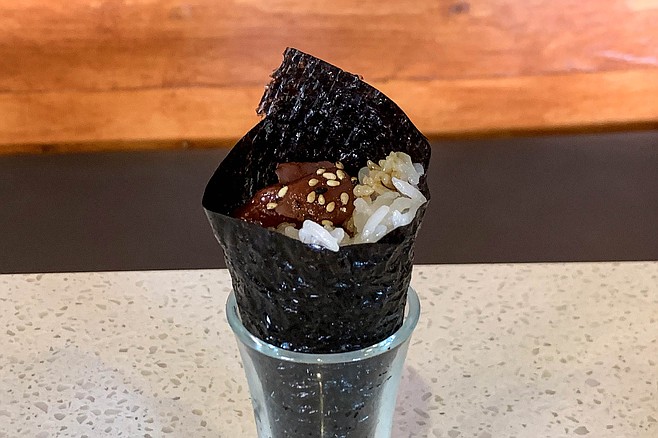 What I learned after trying the salmon oshi sushi is that Chef Jun’s is served aburi style, meaning part cooked part raw. Specifically, here they marinate the fish in a mayo-like mix of canola oil and egg yolk, and torch it, searing and charring the surface while inside remains raw and buttery.

Be sure to add oshi sushi to whatever you order at Chef Jun’s — I couldn’t get enough of it. The mix of salt, oil, fat, and smoke in the fish put it over the top, whether as a premium bar snack, or part of a sushi feast. Heck, even if you don’t live in Bay Ho.