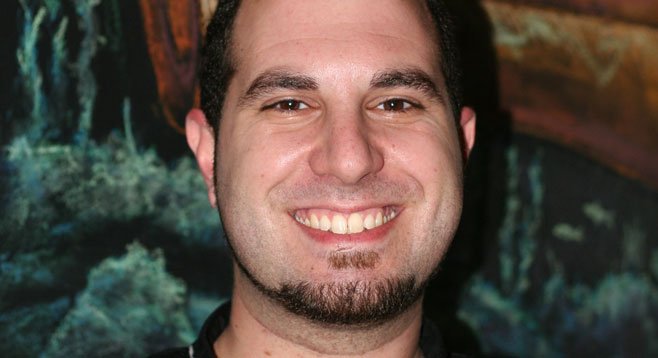 Growing up, I was always in the kitchen helping my dad and grandparents cook. Coming from a Greek and Italian background, food was a major part of our culture, and eating and preparing delicious food was something we did every day. Often, I’d also help out at church functions when they needed a hand in the kitchen. My first experience with restaurants came after graduating from high school, when I started working at a local eatery called Café Deva. I loved everything about it.

When I moved to San Diego to go to college, I took a position with Boudin Bakery and subsequently worked at various other restaurants, including Bing Crosby’s, where I worked my way up to sous chef. Last February, I joined the staff at Sea Rocket Bistro, where I get to create amazing dishes with food from local farmers and growers.

This past January, I participated in ChefDance at the Sundance Film Festival with Chad White [partner and former executive chef at Sea Rocket Bistro] and other San Diego chefs.

ChefDance is an annual event attended by movers and shakers in the film and television industries, highlighted with fare by some of the nation’s best chefs. It was one of the coolest things I’ve ever experienced. We made some pretty crazy dishes and used a lot of liquid nitrogen. For the majority of the time we were in Park City, we spent 16-hour days in the kitchen creating dishes like sea urchin ceviche and a dessert that featured grape air, burnt banana paper, and pot de crème.

I love experimenting with food like this, but I’m also a really simple guy. I cook for my friends and, a lot of the time, I barbeque. For Thanksgiving this year, I made an 11-pound New York strip steak wrapped in bacon and pasted with fresh herbs. I also roasted a turkey and made stuffing, bread pudding, peas and mushrooms, and crab mac & cheese.

HOW TO DO IT

In a medium pan, heat the oil and sauté celery and crab until the celery is bright. Cook box of macaroni and cheese according to instructions and keep warm. Add crab and celery mixture to the prepared macaroni and cheese and then add the 1 cup extra cheese (or more — the cheesier, the better).

Set up a mini-station lining up a dish of flour, a bowl of the beaten egg, and the breadcrumbs. When the macaroni and cheese is cool, roll into little balls. Dredge the balls in flour, then egg, then breadcrumbs so they are nicely coated.

In a large fry pan, heat the vegetable oil to about 375 degrees. Drop in macaroni and cheese balls and cook until they are nice and crispy (about 3 minutes).

Serve hot with a dipping sauce of your choice. (I love bacon-flavored ranch mixed with hot sauce.)