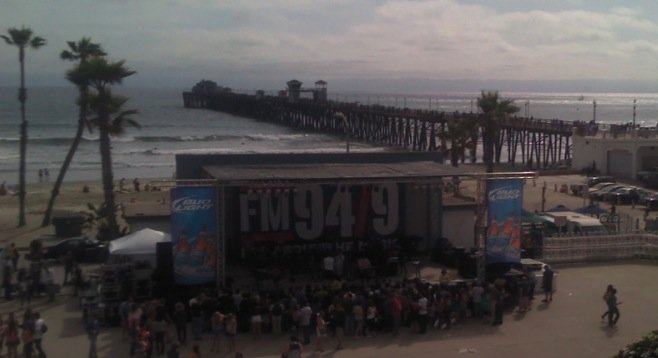 In its third year of existence, the annual FM 94/9 concert took place at the Oceanside Pier for what was titled the FM 94/9 SPF (Sandy Parts Festival). Headlined by producer-turned-artist Santigold, the lineup included an eclectic mix of indie, pop, dance, R&B, and reggae. Guaranteed to fulfill a wide variety of musical tastes.

Overcast weather did not put a damper on the excitement of the all-ages crowd. The up-and-coming indie-pop four-piece Electric Guest provided an impressive kickoff to the sold-out show. Small in stature, lead singer Asa Taccone’s vocal range is a pleasant surprise. Sin City band Imagine Dragons followed and behind their radio-friendly hit “It’s Time‚” the alt-rock quartet put on a decent performance. Next up, hailing from New Zealand, was the post-punk five-piece the Naked and Famous (“Young Blood”). With their second appearance in San Diego in less than a year, there is no question they have received an abundance of support from San Diegans.

Ultimately leading up to Santigold, who took center stage just before 9 p.m., with African dressed backup dancers, and headlined an overall entertaining show. Santigold’s diverse music was an appropriate ending to a diverse festival. However, her talent stands alone in the music world of today.