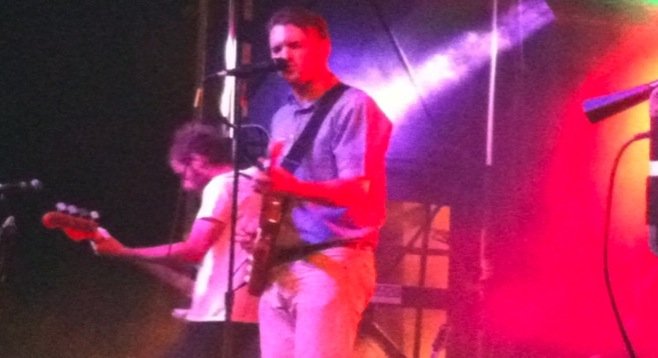 The inaugural SoCal Music Festival took over the streets of East Village downtown for what could evolve into an annual street festival brought back to “America’s Finest City.” Since the end of Street Scene in 2009, San Diegans have had to make the trip to either Coachella or L.A. to experience rock-festival fun.

Spanning about three or four blocks, the SoCal fest experience comprised mostly DJs spinning throughout the day with local boys Transfer and the Cold War Kids from Long Beach closing out the event shortly before midnight.

After a less than crowded performance by Transfer, the blues and soul-injected tunes from Cold War Kids took center stage. Lead singer Nathan Willett’s confident vocal chords are a pleasure to hear when he belts out classics such as “Hang Me Up To Dry” and “Hospital Beds.” Though CWKs most recent album, Mine Is Yours, didn’t win over critics, the title track and deep cut “Royal Blue” were well received by the crowd.

For an otherwise less-than-impressive musical lineup, the final two performances were worth the price of admission and a step in the right direction for next year’s lineup.