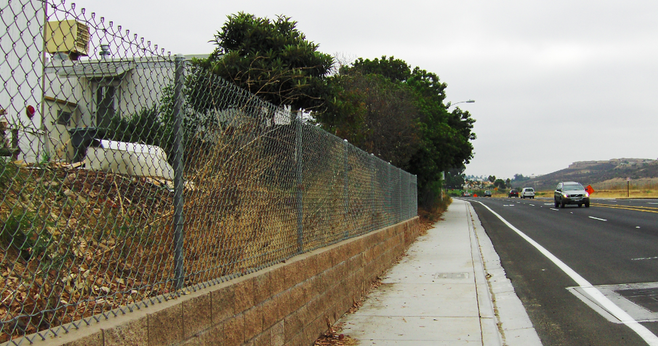 What county officials describe as a "greatly improved" road construction project has some residents of a Spring Valley mobile home park angry and complaining.

"They care more for the birds and skunks than about how the noise and air pollution affects hundreds of people," said park manager Frank DiCroce of Lakeview Manor Mobile Home Estates, which borders the newly widened roadway. He referred to a plywood noise wall at the east end of the project that the county erected to meet U.S. Fish and Wildlife permit requirements.

In order to widen the road, the county removed trees and other foliage that separated Jamacha Boulevard from the backyards of many park homes.

"All we have now separating the residents from 50-mile-an-hour traffic is a flimsy chain-link fence. We lost our noise barrier. They exposed the underwear of the park — the makeshift fencing and unsightly backyards, making us look like trailer trash instead of the family park that we are," added DiCroce. "I asked a project manager whether they considered how this would affect the residents and he told me that first they complete the work and then respond to any complaints."

Park dwellers noted that the closing of the end Omega Street adds extra distance to their commute and increases emergency response time. The closure forces residents and visitors to travel an additional half-mile to reach the park entrance when arriving from the east.

"Fire trucks and ambulances now have another neighborhood to travel through in order to respond to calls here in the park," said a park resident who asked to remain anonymous. "It frightens me because I'm disabled and when I call 911, I need someone right away."

A frontage lane was installed a block west of the park. Residents there pointed out the new lane removed up to ten feet of their front yards.

"My neighbor can't even turn into his driveway now because of the angle of the road," said a homeowner who said his name is Pete.

The county claims the new roadway enhances traffic flow and safety. The public works website states the project is another example of their mission to improve infrastructure. Rubberized asphalt was used, which is quieter and lasts longer. Bicycle lanes were added and concrete sidewalks were built. Overhead utility lines were placed underground and improved storm drains were installed as part of the project.

"It does look nice, though, and now Monte Vista High School students have a sidewalk to walk on instead of a dirt path," added Pete.

Progress makes all things better.....of course it does.....